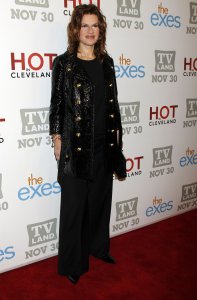 TV // 4 years ago
Two more 'Roseanne' favorites return for revival
Actress and comedian Sandra Bernhard has announced she is returning to "Roseanne," the classic sitcom ABC is reviving for next year.

Top News // 5 years ago
The Almanac
On June 6, 1944, Allied troops began crossing the English Channel in the D-Day invasion of Nazi-occupied Europe. It was the largest invasion in history.

Maybe I'd have a lot more money and a certain kind of success that I don't have, but I'd certainly never have the fun that I have and I'm having

Sandra Bernhard (born June 6, 1955) is an American comedian, singer, actress and author. She first gained attention in the late 1970s with her stand-up comedy in which she often bitterly critiques celebrity culture and political figures. Bernhard is number 97 on Comedy Central's list of the 100 greatest standups of all time.

Bernhard has often addressed her childhood in interviews and within the context of her stand-up comedy. She was born in Flint, Michigan, the daughter of Jeanette and Jerome Bernhard. She has three older brothers. Her family moved to Scottsdale, Arizona, when she was 10.

Of her Jewish family, Bernhard stated in her show Without You I'm Nothing: "My father was a proctologist and my mother was an abstract artist, so that's how I view the world." In the documentary program Girls Who Do: Comedy, she discusses being a funny teenager. After graduating from Saguaro High School in Scottsdale, Arizona, she went to live on a kibbutz in Israel. She moved to Los Angeles at the age of 19. During that time she made ends meet working as a manicurist in a high-end salon.

FULL ARTICLE AT WIKIPEDIA.ORG
This article is licensed under the GNU Free Documentation License.
It uses material from the Wikipedia article "Sandra Bernhard."