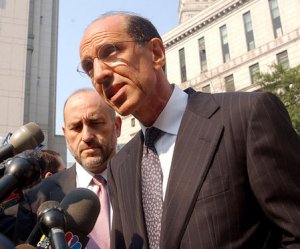 Samuel D. Waksal (born 8 September 1947) is the founder and former CEO of the biopharmaceutical company ImClone Systems, which developed the drug Erbitux (cetuximab). In the course of an insider trading scandal, he was convicted of several white collar crimes, served time in federal prison, and has now been released.

Waksal earned a bachelor's degree in 1969 and a doctorate in immunobiology in 1974, both from The Ohio State University.

He dated Martha Stewart's daughter, Alexis for years prior to his criminal conviction.

FULL ARTICLE AT WIKIPEDIA.ORG
This article is licensed under the GNU Free Documentation License.
It uses material from the Wikipedia article "Samuel Waksal."