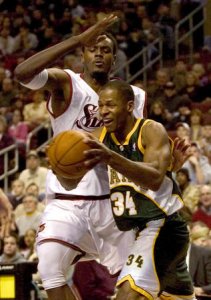 Sports News // 6 years ago
Photos: Fans hide faces behind paper bags as hapless Knicks lose 14th straight game
Fans of the NBA-worst New York Knicks have grown so ashamed of their team they've taken to wearing bags over their heads in embarrassment.

Samuel Davis Dalembert (born May 10, 1981) is a Haitian Canadian professional basketball player who plays center for the NBA's Sacramento Kings. Dalembert began playing in Montreal, Quebec and played college basketball at Seton Hall University in New Jersey, United States. Dalembert is known for his excellent shot blocking ability; he averages around two blocks per game, placing him among the league's elite in this category. He was born in Port-au-Prince, Haiti and lived there for fourteen years before moving to Montreal. After playing 8 seasons with the Philadelphia 76ers, he was traded to the Sacramento Kings for Andres Nocioni and Spencer Hawes during the 2010 offseason.

Dalembert became a Canadian citizen on August 7, 2007 and joined the Canadian national team in hopes of qualifying for the Olympics. However, in July 2008 Dalembert was dismissed from the team during the World Olympic Qualifying Tournament.

Dalembert decided to travel to Haiti to help with relief efforts following the 2010 Haitian earthquake. He also pledged $100,000 to UNICEF.

FULL ARTICLE AT WIKIPEDIA.ORG
This article is licensed under the GNU Free Documentation License.
It uses material from the Wikipedia article "Samuel Dalembert."
Back to Article
/