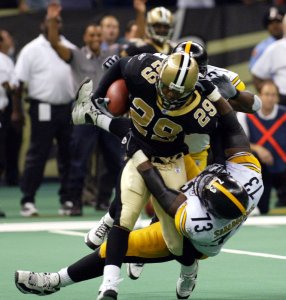 I've spent six years there (in New Orleans) and, the way it seems, it's time to move on

I've spent six years there (in New Orleans) and, the way it seems, it's time to move on

With Corey Dillon pounding us all day, it seemed like we wore down a little bit at the end there

Sammy D. Knight, Jr. (born September 10, 1975 in Fontana, California) is an American football safety who is currently a free agent. He was signed by the New Orleans Saints as an undrafted free agent in 1997. He played college football at Southern California.

A Pro Bowl selection with the Saints in 2001, Knight has also played for the Miami Dolphins, Kansas City Chiefs, Jacksonville Jaguars and New York Giants.

Knight graduated from Rubidoux High School in Riverside, California before attending the University of Southern California. Older brother, Ryan, played running back at USC (1983-1986). Other older brother, Greg, played at Colorado, while younger brother, Darryl played linebacker at USC (1998-2000). His father, Sam Knight, was an outstanding athlete in high school and college.

FULL ARTICLE AT WIKIPEDIA.ORG
This article is licensed under the GNU Free Documentation License.
It uses material from the Wikipedia article "Sammy Knight."
Back to Article
/