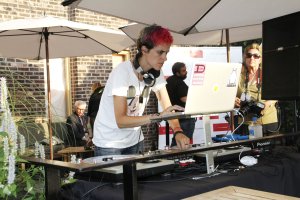 Top News // 3 years ago
The Almanac
On August 7, 1998, terrorists' bombs detonated within minutes of each other outside of U.S. embassy buildings in Nairobi, Kenya, and Dar es Salaam, Tanzania.

Top News // 4 years ago
The Almanac
On August 7, 1963, Jacqueline Kennedy becomes the first sitting U.S. first lady to give birth since Frances Folsom Cleveland in 1897.

We really feel bad, and I work sick when I can, but unfortunately I couldn't drive to Miami, so I'm stuck in New York City with doctor's orders not to fly

Ronson was born in London. She is the daughter of writer-socialite Ann Dexter-Jones and music executive and real estate entrepreneur Laurence Ronson. Her parents are of Ashkenazi Jewish descent, with ancestors from Russia, Lithuania and Austria. Ronson is related to former British Foreign Secretary Sir Malcolm Rifkind and Leon Brittan (Lord Brittan of Spennithorne), and is the younger sister of music producer Mark Ronson and the twin sister of fashion designer Charlotte Ronson Her uncle and aunt are Gerald and Dame Gail Ronson.

After her parents divorced, her mother married Foreigner guitarist Mick Jones and moved the family to New York. Jones contributed to a childhood surrounded by music. This marriage produced Ronson's two younger half siblings Alexander and Annabelle. Ann and Mick divorced in 2007. At age sixteen Samantha Ronson was in a rap group called the Low Lifes.

FULL ARTICLE AT WIKIPEDIA.ORG
This article is licensed under the GNU Free Documentation License.
It uses material from the Wikipedia article "Samantha Ronson."