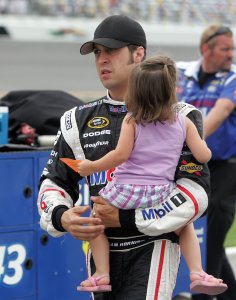 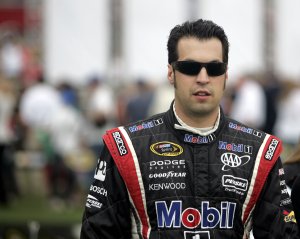 Its been a long month and not everything went our way as we saw today, but we stuck together as a team, we had a good plan and we were fast when we needed it

Samuel Jon Hornish Jr. (born July 2, 1979 in Bryan, Ohio) is an American race car driver. He is best known for his open wheel accomplishments, which include an Indianapolis 500 victory and three Indy Racing League championships. He currently drives the #12 Alliance Truck Parts Dodge Challenger for Penske Racing part-time in the NASCAR Nationwide Series. He also drives the #38 Front Row Motorsports Ford when Travis Kvapil is unable to drive the car.

Hornish began racing at the age of 11 in go-kart. After competing in junior leagues for various seasons, he joined the World Karting Association in 1993, winning seven races and posting twenty-nine top-five finishes. The following season, he won several championships in WKA, including the U.S. and Canadian Grand Championships, as well as the U.S. Junior Class Grand Championship. In 1995, he repeated his U.S. Grand National title and won nine races. He would move up to the United States F2000 Series, driving six races for his family-owned team, and had one top-ten finish at Watkins Glen International. He joined Bordin Racing in 1997 and had two eleventh-place finishes, before signing with Primus Racing. He had a second-place run at Pikes Peak International Raceway and finished seventh in points.

In 1999, Hornish moved to the Toyota Atlantic Series to drive for Shank Racing. He won Rookie of the Year after getting his victory at Chicago Motor Speedway. He also drove the 24 Hours of Daytona for Intersport Racing.

FULL ARTICLE AT WIKIPEDIA.ORG
This article is licensed under the GNU Free Documentation License.
It uses material from the Wikipedia article "Sam Hornish."
Back to Article
/