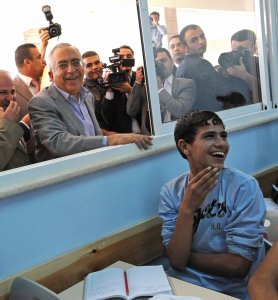 The deployment of these forces is part of a plan by the Palestinian Authority to bring security to its citizens, just like in any other country in the world. I hope this plan will be successful, as was the case in Jenin, Nablus, and other West Bank cities

Palestinians want to live in freedom, like any other people, because in freedom there is dignity, as there is in freedom from fear

The exclusion of Jerusalem is a very, very serious problem for us

The time for this baby to be born will come

Salam Fayyad (Arabic: سلام فياض‎, Salām Fayāḍ; born 1952) is a Palestinian politician and one of two disputed Prime Ministers of the Palestinian National Authority, the matter being under political and legal dispute. His first appointment, on 15 June 2007, which was justified by President Mahmoud Abbas on the basis of "national emergency", has not been confirmed by the Palestinian Legislative Council, the Palestinian Authority's parliament. He was reappointed on 19 May 2009. Fayyad has also been the finance minister from 17 March 2007 and previously held the post from June 2002 to November 2006. Fayyad is an internationally respected economist and politician.

Salam Fayyad was born in Deir al-Ghusun. He graduated from the American University of Beirut in 1975 and received his MBA from St. Edward's University in 1980. Fayyad has a PhD in economics from the University of Texas at Austin, where he was a student of William Barnett and did early research on the American Divisia Monetary Aggregates, which he continued on the staff of the Federal Reserve Bank of St. Louis. Fayyad began his career teaching economics at Yarmouk University in Jordan, before joining the International Monetary Fund in 1987, where he served as representative to the Palestinian National Authority from 1996-2001. Following this Fayyad served as the regional manager of the Arab Bank in the West Bank and Gaza until he accepted an offer to become Yasser Arafat's finance minister.

FULL ARTICLE AT WIKIPEDIA.ORG
This article is licensed under the GNU Free Documentation License.
It uses material from the Wikipedia article "Salam Fayyad."
Back to Article
/