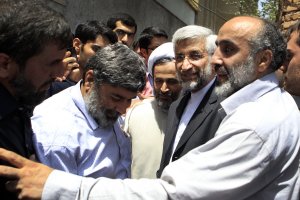 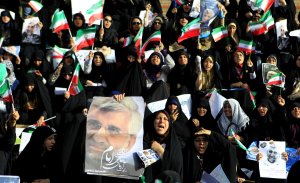 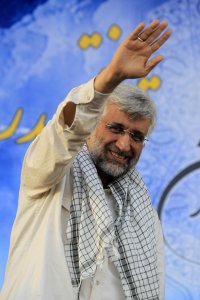 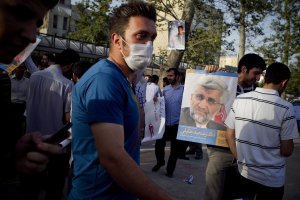 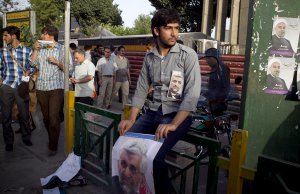 World News // 1 year ago
Iran OKs 7 candidates to replace Rouhani as president next month
The Iranian government on Tuesday released a list of seven candidates it has approved to run for president in next month's election to succeed President Hassan Rouhani.
World News // 8 years ago
U.S.: Iran orders Iraqi militants to hit U.S. Embassy if Syria is hit
An intercepted order from Iran instructs militants in Iraq to hit the U.S. Embassy and other interests if a military strike on Syria occurs, U.S. officials said.
World News // 8 years ago
Iran may tap moderate to lead nuke talks
Iranian officials signaled Tuesday they may change the leader of their nuclear negotiating team, possibly tapping a diplomat educated in the United States.
World News // 8 years ago
Iran president ready to talk on nuke program
Iran's new president took to Twitter Tuesday to say he thinks negotiations over the nation's hotly debated nuclear enrichment program could prove fruitful.
Special Reports // 9 years ago
Iran mulls more nuclear talks in Kazakhstan
A nuclear negotiating team from Iran is waiting on word from its diplomatic partners on whether to hold talks in Kazakhstan, an Iranian envoy said.
Special Reports // 9 years ago
Few tilts seen from Iran with new president
Iran's Supreme Leader Ali Khamenei matters more in terms of foreign policy than the next Iranian president, a U.S. expert on Iran said Friday.
World News // 9 years ago
Polls open as six vie to become Iran's next president
As millions of Iranians cast ballots in the country's presidential election, one candidate has been reaching out to reformists in recent days.
Special Reports // 9 years ago
Iran: Khamenei the real winner in presidential election
With the Revolutionary Guards poised to crash down on any political protests, Iran goes to the polls Friday in a presidential election in which the real winner will be the Islamic Republic's dour supreme leader, Ayatollah Ali Khamenei.
World News // 9 years ago
Iranians vote Friday for next president
Iranians vote Friday to choose a successor to Mahmoud Ahmadinejad as the country's president.
Special Reports // 9 years ago
Iran's ruling cleric praises debate spirit
Debates between the eight candidates running for president in Iran show diverse opinions are welcomed in the Islamic republic, the ruling cleric said Wednesday.

In this system, more power means having a bigger share in making decisions about the countries

In our package, we did not make any demand but announced Iran's willingness for talks, which was welcomed by many countries

Saeed Jalili, (Persian: سعید جلیلی, born 1965 in Mashhad ) is an Iranian politician and the present secretary of Iran's Supreme National Security Council. On October 20, 2007, he replaced Ali Larijani as the secretary of the council and hence chief nuclear negotiator of Iran. He was previously Deputy Foreign Minister for European and American Affairs.

Born 1965 in Mashhad, Jalili has a Ph.D in political science from Imam Sadeq University, the title of his doctoral thesis was "Paradigm of Political Thought of Islam in the Holy Quran". He worked as a university lecturer before becoming a junior government official in 1989, rising to become Director General for Office of Supreme Leader of Iran in 2001 and Deputy Foreign Minister for European and American Affairs and an advisor to the President Mahmoud Ahmadinejad in 2005. He speaks Persian, English, and Arabic.

FULL ARTICLE AT WIKIPEDIA.ORG
This article is licensed under the GNU Free Documentation License.
It uses material from the Wikipedia article "Saeed Jalili."