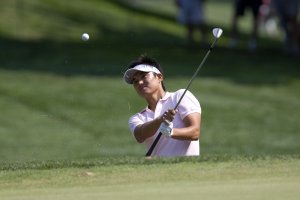 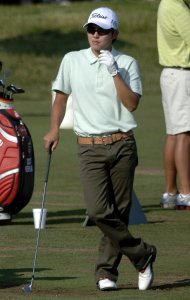 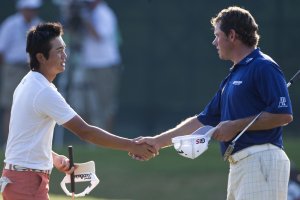 Imada was born in Mihara, Hiroshima, Japan. He came to the United States when he was 14 to attend a Tampa golf academy for Asian players. His instructor was (and still is) Richard Abele, who became his legal guardian. Under Abele's teaching, he won several of the top tournaments on the amateur circuit and reached the final of the 1997 U.S. Amateur Public Links. His accomplishments in the American Junior Golf Association led to a scholarship to University of Georgia, where he played for two years and helped the Bulldogs win the 1999 NCAA title.

Imada turned professional in 1999. From 2000 to 2004 he played on the second tier Nationwide Tour, winning the 2000 BUY.COM Virginia Beach Open and the 2004 BMW Charity Pro-Am at The Cliffs. On the Monday following his win, Imada fired a back-nine score of 29 in U.S. Open qualifying at Scotch Valley, in Hollidaysburg, Pennsylvania. He was the medalist, with a score of 64, and advanced to sectional qualifying. His third place finish on the 2004 money list earned him promotion to the PGA Tour.

FULL ARTICLE AT WIKIPEDIA.ORG
This article is licensed under the GNU Free Documentation License.
It uses material from the Wikipedia article "Ryuji Imada."
Back to Article
/