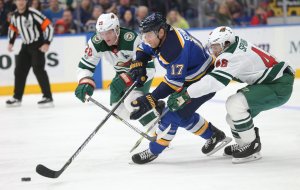 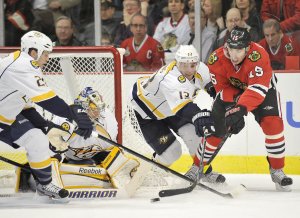 NHL // 3 years ago
Wild getting offense from defense, take on Kings
The Minnesota Wild are getting the type of offense from their defensemen that Los Angeles Kings interim coach Willie Desjardins hopes to see from his new team.

NHL // 4 years ago
Winnipeg Jets look to end series against Minnesota Wild
Nobody needs to tell Winnipeg Jets fans what happened the last time their team had a 3-1 lead in a playoff series.

NHL // 4 years ago
Wild wait for grounded Jets
SAINT PAUL, Minn. -- The Winnipeg Whiteout -- that tradition which has Jets fans celebrating the region's often inclement winter weather by wearing white to playoff games -- seemed like a good idea, especially as raucous home crowds helped spur the Jets to a 2-0 lead in their best-of-seven first round playoff series with the Minnesota Wild.

Ryan Suter (born January 21, 1985) is a professional ice hockey defenseman who currently plays for and serves as an alternate captain for the Nashville Predators of the National Hockey League (NHL). He is also an alternate captain of the US Olympic Team for the 2010 Winter Olympics. Ryan's father, Bob, was a member of the historic gold medal-winning 1980 United States Olympic hockey team that defeated the Soviet Union in the famous "Miracle on Ice" game. Ryan's uncle Gary Suter was a long-time standout in the NHL, playing for 17 seasons with the Calgary Flames, Chicago Blackhawks, and the San Jose Sharks, and won the silver medal representing the United States in the 2002 Winter Olympics at Salt Lake City. Ryan was alternate captain for the US team, and carried on the family trend by earning a silver medal in the 2010 Vancouver Winter Olympics.

Suter played for the Madison Capitols, Culver Military Academy and then on to USA Hockey's National Development Team in Ann arbor, Michigan before he was drafted 7th overall by the Nashville Predators in the 2003 NHL Entry Draft. He then played one year with the Wisconsin Badgers (Western Collegiate Hockey Association in NCAA Division I) before joining the Milwaukee Admirals of the American Hockey League during the 2004–05 season. He played his rookie season in the NHL with the Predators in 2005–06.

In international play, he has represented the United States in around seven tournaments, and has won three gold medals. He says that,

FULL ARTICLE AT WIKIPEDIA.ORG
This article is licensed under the GNU Free Documentation License.
It uses material from the Wikipedia article "Ryan Suter."