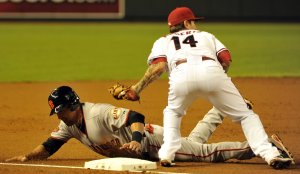 We looked at him and said, 'Sorry. He's my nephew. We've got to go

Ryan Alan Roberts (born September 19, 1980, in Fort Worth, Texas) is a Major League Baseball infielder for the Arizona Diamondbacks. A right-handed batter, Roberts is 5' 11" tall and weighs 190 pounds. He is married to actress Kim Camille. Roberts has over 30 tattoos.

After graduating from L. D. Bell High School (Hurst, Texas), Roberts' team won an NJCAA Division III World Series his sophomore year at Eastfield Junior College in Mesquite, Texas. Roberts was an All-American with a .475 batting average, 17 home runs, and 73 RBIs, and was named a MAC All-Conference and All-American Selection at shortstop. Roberts transferred to the University of Texas at Arlington. After his senior year in 2003, he was named Southland Conference Player of the Year and Hitter of the Year. He was among the conference leaders in eight different offensive categories, was first-team all-SLC as a third baseman, and was also named to several All-America teams. In 2003, Baseball America analyst John Manuel described Roberts as the best player on UTA's squad which also included Hunter Pence now with the Philadelphia Phillies.

The Toronto Blue Jays selected Roberts with the 530th overall pick of the 2003 draft, in the 18th round. Roberts signed with the Blue Jays and made his professional debut in the New York-Penn League. In 2003, after Roberts had been drafted, Manuel described him in an online chat as an "interesting sleeper", and said that "his best tool is his bat".

FULL ARTICLE AT WIKIPEDIA.ORG
This article is licensed under the GNU Free Documentation License.
It uses material from the Wikipedia article "Ryan Roberts."
Back to Article
/