NHL // 2 years ago
Ducks aim to start new road streak vs. Bruins
BOSTON -- Having fallen one short of matching the franchise record for consecutive road wins, the Anaheim Ducks visit what has been a friendly place for them on Thursday night. 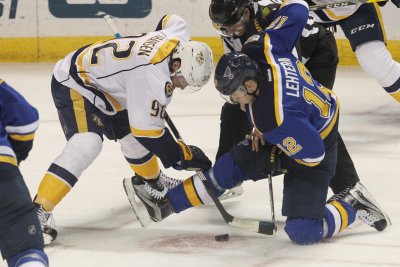 NHL // 3 years ago
2017 NHL Stanley Cup Finals: Top 10 things to watch, preview, updates
With a defending champion on one side and a de facto 16th seed on the other side, this year's Stanley Cup Final promises to be one of the most fascinating in a long time.

NHL // 3 years ago
Nashville Predators earn first Stanley Cup finals spot with 6-3 victory over Anaheim Ducks
NASHVILLE, Tenn. -- No matter the shot margin, no matter how dire the situation looked for a stretch of the third period, the Nashville Predators were determined to keep their date with history Monday night.

Ryan James Kesler (born August 31, 1984) is an American professional ice hockey center for the Vancouver Canucks of the National Hockey League (NHL). He serves as an alternate captain for the Canucks during home games. Selected in the first round, 23rd overall by the Vancouver Canucks in the 2003 NHL Entry Draft, Kesler has spent his entire seven-year NHL career with the Canucks. He is best known for being a two-way forward, winning the Selke Trophy in 2011 after having finished as a finalist the previous two years, as well as for his agitating style of play.

Kesler played junior hockey with the U.S. National Team Development Program from which he then accepted a scholarship to play college hockey with the Ohio State Buckeyes of the Central Collegiate Hockey Association (CCHA). In one season with the Buckeyes, he was an honourable mention for the CCHA All-Rookie Team and was named CCHA Rookie of the Week three times and CCHA Rookie of the Month once. In addition to the U.S. National Team Development Program and the Ohio State Buckeyes, Kesler has also suited up for the Manitoba Moose of the American Hockey League (AHL), where he was named to an AHL All-Star Game.

Kesler has represented the United States at five International Ice Hockey Federation-sanctioned events, winning one World U18 Championship gold medal, one World Junior Championships gold medal, and the 2010 Winter Olympics silver medal. He also participated in the 2001 World U-17 Hockey Challenge where he won a gold medal.

FULL ARTICLE AT WIKIPEDIA.ORG
This article is licensed under the GNU Free Documentation License.
It uses material from the Wikipedia article "Ryan Kesler."
Back to Article
/