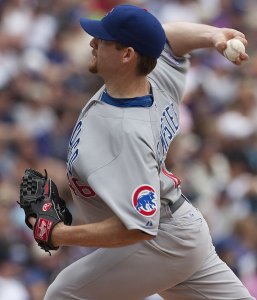 He was drafted by the Texas Rangers and was traded to the Florida Marlins. He has played for the Marlins (1998–2002), Cincinnati Reds (2002–2003), and Chicago Cubs (2004–present). In August 2003, he underwent Tommy John surgery on his right elbow and made a miraculous recovery from the surgery, taking a little under a year to recover from it, coming back in the last half of 2004 to pitch for the Cubs. In 2005, after starting 6 games, Dempster was named the closer for the Cubs, replacing LaTroy Hawkins.

He collected 33 saves in 35 opportunities, the best save percentage in the league; in both blown saves, he collected the win. He is the only Cub and one of just three players ever to both start a game and collect 30 saves in the same season. On October 1, 2005, the Cubs signed him through 2008 in a US$15.5 million contract extension.

FULL ARTICLE AT WIKIPEDIA.ORG
This article is licensed under the GNU Free Documentation License.
It uses material from the Wikipedia article "Ryan Dempster."
Back to Article
/