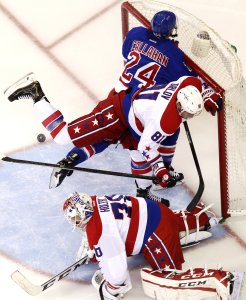 NHL // 2 years ago
Coyotes face Senators going for fourth straight win
GLENDALE, Ariz.-Sometimes winning a game depends not on how you're playing or where you're playing, but when you're playing.

NHL // 2 years ago
Lightning take on winless Red Wings
TAMPA, Fla. -- While the Tampa Bay Lightning wait for All-Stars Steven Stamkos and Nikita Kucherov to find an early-season groove, they have others who can carry the load. 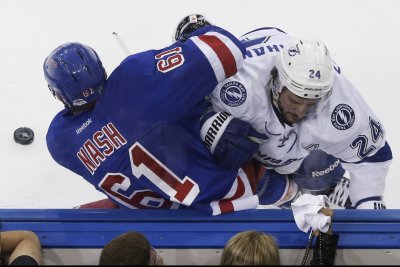 Ryan Callahan (born March 21, 1985) is an American ice hockey forward and an alternate captain of the New York Rangers of the National Hockey League (NHL).

Callahan played one year of high school hockey for Hilton High School. He began his junior career with the Rochester Junior Americans of the Empire Junior B Hockey League where he played for two seasons, 1999–2001, then moving on to the Syracuse Jr. Crunch and Buffalo Lightning of the OPJHL before moving onto a four-year Ontario Hockey League (OHL) stint with the Guelph Storm, where he played alongside future Ranger teammate Daniel Girardi. Ryan turned professional with the Hartford Wolf Pack of the American Hockey League (AHL), where he played most of the 2006–07 season.

Callahan received his first NHL call-up to the Rangers on November 28, 2006, making his NHL debut on December 1, but he would only play in that one game before being sent back down to the Wolf Pack. He was called up for a second time on December 19, but would again only play in one NHL game in that stint. Towards the end of the season, Callahan was called up for the third and final time on March 15, 2007, after scoring 35 goals in 60 AHL games, and he would stay with the Rangers through the postseason. Two days later, on March 17, he scored his first two NHL goals against Joey MacDonald of the Boston Bruins. He scored his first career assist on March 21 and first career game-winning goal on April 1. He scored his first two NHL playoff goals in a 7–0 win in Game Three of the Eastern Conference Quarterfinals against the Atlanta Thrashers on April 17, 2007.

FULL ARTICLE AT WIKIPEDIA.ORG
This article is licensed under the GNU Free Documentation License.
It uses material from the Wikipedia article "Ryan Callahan."
Back to Article
/