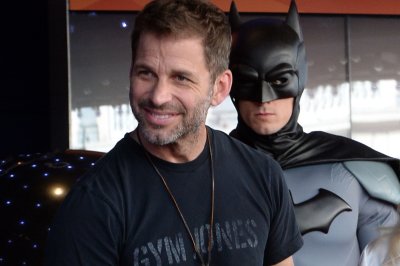 Movies // 2 months ago
'Unhinged,' starring Russell Crowe, to open in theaters July 1
"Unhinged," a road rage thriller, is expected to be the first film back in movie theaters as restrictions ease amid the coronavirus pandemic.

Entertainment News // 6 months ago
'Succession,' 'Fleabag,' 'Hollywood,' '1917' win big at the Golden Globes
"Succession," "Chernobyl," "Fleabag," "Once Upon a Time in Hollywood" and "1917" were the big winners in at the Golden Globe Awards gala in Los Angeles Sunday night.

World News // 8 months ago
At least 170 homes destroyed so far by Australia wildfires
Fire crews fought more than 100 wildfires across eastern Australia on Tuesday, a day officials expected to be one of the most dangerous the country has ever seen.

Nicole had one look at my younger son Tennyson, and looked up at me and said, 'I'm a great believer in arranged marriages,

If there's any director I know who deserves an Oscar, it's Ridley Scott

I've always seen it to be a privilege to make movies

Russell Ira Crowe (born 7 April 1964) is a New Zealand-born Australian actor and musician. His acting career began in the late 1980s with roles in Australian television series including Police Rescue and Neighbours. In the early 1990s, Crowe's local prominence peaked when he won the Australian Film Industry Award for Best Actor for his portrayal of an inner-city skinhead in the Geoffrey Wright film, Romper Stomper. In the late 1990s, Crowe transferred his acting ambitions to the USA with his breakout role in L.A. Confidential (1997). Crowe won the Academy Award for Best Actor for Gladiator in 2001 and has received three Academy Award nominations for Best Actor in a Leading Role: The Insider (1999), Gladiator (2000) and A Beautiful Mind (2001). He is also co-owner of South Sydney Rabbitohs, a National Rugby League team.

Crowe was born on 7 April 1964 in Wellington, New Zealand, the son of Jocelyn Yvonne (née Wemyss) and John Alexander Crowe, both of whom were movie set caterers; his father also managed a hotel. Crowe's maternal grandfather, Stan Wemyss, was a cinematographer who was named an MBE for filming footage of World War II. Crowe's maternal great-great-grandmother was Māori, and his paternal grandfather was from Wrexham, Wales; Crowe also has Scottish, Norwegian, English, and German ancestry. His two cousins, Martin and Jeff Crowe, are former New Zealand cricket captains.

When Crowe was four years old, his family moved to Australia, where his parents pursued a career in film set catering. The producer of the Australian TV series Spyforce was his mother's godfather, and Crowe at age five or six was hired for a line of dialogue in one episode, opposite series star Jack Thompson (in 1994 Thompson played Crowe's father in The Sum of Us. Crowe also appeared briefly in serial The Young Doctors.

FULL ARTICLE AT WIKIPEDIA.ORG
This article is licensed under the GNU Free Documentation License.
It uses material from the Wikipedia article "Russell Crowe."
Back to Article
/