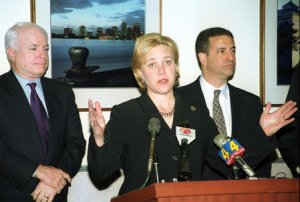 U.S. News // 4 years ago
GOP's Ron Johnson pulls off Senate stunner in Wisconsin
In Wisconsin, Sen. Ron Johnson, one of the most vulnerable Republican incumbents in the country, pulled off a huge upset, defeating former Sen. Russ Feingold.

U.S. News // 5 years ago
Wisconsin's Russ Feingold announces 2016 Senate run
Former Wisconsin Democratic Sen. Russ Feingold announced he will run for his old senate seat in 2016, setting up a rematch with Republican Ron Johnson.
Special Reports // 6 years ago
Impunity sparked African crises, Pillay says
U.N. High Commissioner for Human Rights Navi Pillay said Wednesday a culture of impunity may be partly responsible for violence in Africa's Great Lakes region.
Special Reports // 6 years ago
African envoy Feingold headed to fragile DRC
U.S. special African envoy Russ Feingold is headed to the Democratic Republic of Congo to assess the prospects for peace, the U.S. State Department said.
Special Reports // 6 years ago
DRC not out of the woods, U.S. warns
The end of the March 23 Movement in the Democratic Republic of Congo is a beginning but more work is needed, a U.S. State Department spokeswoman said.
Special Reports // 7 years ago
M23 rebels surrender in Uganda
Uganda is waiting for a formal peace deal in neighboring DRC before it decides whether or not to hand over M23 rebel fighters, a spokesman said Thursday.

The American people will pay dearly for this decision when, more than ever, their voices are drowned out by corporate spending in our federal elections

Ten years on, the United States still does not have a long-term strategy to bring peace and stability to the Horn of Africa

If the courts can't offer that protection, then that responsibility falls to Congress

Russell Dana "Russ" Feingold (pronounced /ˈfaɪn.ɡoʊld/; born March 2, 1953) is an American politician from the U.S. state of Wisconsin. He served as a Democratic party member of the U.S. Senate from 1993 to 2011. From 1983 to 1993, Feingold was a Wisconsin State Senator representing the 27th District.

He is a recipient of the John F. Kennedy Profile in Courage Award, and cosponsored the Bipartisan Campaign Reform Act (McCain–Feingold Act), a major piece of campaign finance reform legislation. He was the only Senator to vote against the USA PATRIOT Act during the first vote on the legislation.

Feingold had been mentioned as a possible candidate in the 2008 Presidential election, but following the November midterm elections of 2006 he chose not to run. In 2010, Feingold lost his campaign for re-election to the US Senate to Republican Ron Johnson .

FULL ARTICLE AT WIKIPEDIA.ORG
This article is licensed under the GNU Free Documentation License.
It uses material from the Wikipedia article "Russ Feingold."
Back to Article
/