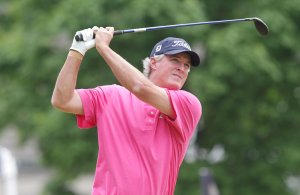 The greens were lightning out there. I almost three-putted No. 9; that green was really quick

Russell Earl Cochran (born October 31, 1958) is an American professional golfer on the Champions Tour who has played on the PGA Tour and the Nationwide Tour. He is one of eight left-handed players to win a PGA Tour event.

Cochran was born, raised and has lived most of his life in Paducah, Kentucky. He grew up playing on Paxton Park Public Golf Course in Paducah, as did fellow PGA Tour player Kenny Perry, who came along a couple years later. After graduating from St. Mary High School in Paducah, he attended the University of Kentucky and was a member of the golf team. He turned pro in 1979 and joined the PGA Tour in 1982.

Cochran has about 60 top-10 finishes in official PGA Tour events including a victory at the 1991 Centel Western Open when he overcame a five-stroke deficit over eight holes to beat Greg Norman. His career year was 1991, when in addition to his win at the Western Open, he had two second-place finishes—including a playoff loss to Craig Stadler at the Tour Championship -- and a third and finished 10th on the money list. His best finish in a major was a tie for seventh at the 1992 PGA Championship. Cochran set the Valhalla Golf Club course record (65) in the third round of the 1996 PGA Championship which stood until broken (63) in the same tournament four years later by José María Olazábal. He played some on the Nationwide Tour in his mid-to-late 40s in preparation for the Champions Tour. His best Nationwide finish was a tie for third at the 2003 Chitimacha Louisiana Open.

FULL ARTICLE AT WIKIPEDIA.ORG
This article is licensed under the GNU Free Documentation License.
It uses material from the Wikipedia article "Russ Cochran."
Back to Article
/