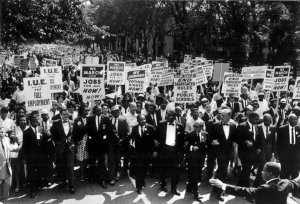 Roy Wilkins (August 30, 1901 – September 8, 1981) was a prominent civil rights activist in the United States from the 1930s to the 1970s. Wilkins' most notable role was in his leadership of the National Association for the Advancement of Colored People (NAACP).

Born in St. Louis, Missouri, Wilkins graduated from the University of Minnesota with a degree in sociology in 1923. He worked as a journalist at The Minnesota Daily and became editor of St. Paul Appeal, an African-American newspaper. After he graduated he became the editor of the The Call (Kansas City). In 1929, he married social worker Aminda "Minnie" Badeau; the couple had no children.

Between 1931 and 1934, Wilkins was assistant NAACP secretary under Walter Francis White. When W. E. B. Du Bois left the organization in 1934, he replaced him as editor of The Crisis, the official magazine of the NAACP. From 1949–50 Wilkins chaired the National Emergency Civil Rights Mobilization, which comprised more than 100 local and national groups.

FULL ARTICLE AT WIKIPEDIA.ORG
This article is licensed under the GNU Free Documentation License.
It uses material from the Wikipedia article "Roy Wilkins."