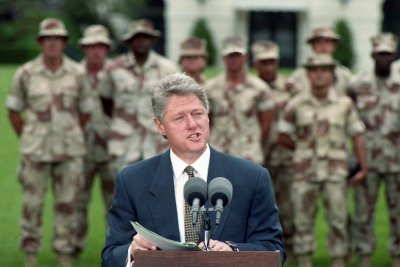 Science News // 1 year ago
Apollo 11 at 50: Mission's scientific legacy was just getting to the moon
Dozens of experiments now travel to and from the International Space Station, and each NASA mission features an array of scientific objectives. For Apollo 11, 50 years ago, making it to the moon was the whole experiment.

Top News // 3 years ago
On This Day: 110 years ago, United Press is formed by E.W. Scripps
On July 15, 1907, three press associations joined to form United Press, which would eventually become United Press International.

The Rosetta Stone is an Ancient Egyptian artifact which was instrumental in advancing modern understanding of hieroglyphic writing. The stone is a Ptolemaic era stele with carved text made up of three translations of a single passage: two in Egyptian language scripts (hieroglyphic and Demotic) and one in classical Greek. It was created in 196 BC, discovered by the French in 1799 at Rosetta and contributed greatly to the deciphering of the principles of hieroglyph writing in 1822 by the British scientist Thomas Young and the French scholar Jean-François Champollion. Comparative translation of the stone assisted in understanding many previously undecipherable examples of hieroglyphic writing. The text on the stone is a decree from Ptolemy V, describing the repealing of various taxes and instructions to erect statues in temples.

The stone is 114.4 centimetres (45.0 in) high at its highest point, 72.3 centimetres (28.5 in) wide, and 27.9 centimetres (11.0 in) thick. It is unfinished on its sides and reverse. Weighing approximately 760 kilograms (1,700 lb), it was originally thought to be granite or basalt but is currently described as granodiorite of a dark pinkish-gray color. The stone has been on public display at The British Museum since 1802.

In preparation for Napoleon's 1798 campaign in Egypt, the French founded the Institut de l'Égypte in Cairo which brought 167 scientists and archaeologists to the region. French Army engineer Captain Pierre-François Bouchard discovered the stone sometime – the sources are not specific – in mid-July 1799, while guiding construction work at Fort Julien near the Egyptian port city of Rashid (Rosetta). The Napoleonic army was so awestruck by this unheralded spectacle that, according to a witness, "It halted of itself and, by one spontaneous impulse, grounded its arms." (As quoted by Robert Claiborne, The Birth of Writing , p. 24.) After Napoleon returned in 1799, 167 scholars remained behind with French troops which held off British and Ottoman attacks. In March 1801, the British landed on Aboukir Bay and scholars carried the Stone from Cairo to Alexandria alongside the troops of Jacques-Francois Menou. French troops in Cairo capitulated on June 22, and in Alexandria on August 30.

FULL ARTICLE AT WIKIPEDIA.ORG
This article is licensed under the GNU Free Documentation License.
It uses material from the Wikipedia article "Rosetta Stone."
Back to Article
/