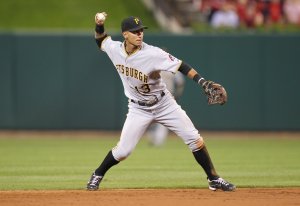 Ronny Alexander Cedeño (born February 2, 1983) is a Venezuelan professional baseball shortstop with the Pittsburgh Pirates of Major League Baseball. He bats and throws right-handed and was born in Puerto Cabello, Venezuela.

Cedeño spent his five-season minor league career playing in the Cubs' farm system, reaching the Double-A level in 2004 with the Diamond Jaxx. In 116 games, he posted a .279 batting average with six home runs and 48 RBI. He was selected as a midseason Southern League All-Star.

Cedeño was called up in April 2005 to replace Nomar Garciaparra on the Cubs' roster. He made big-league debut for the Chicago Cubs on April 23, 2005, but spent most of his time on the bench, as Neifi Pérez was awarded the starting job. After the Cubs signed Enrique Wilson, Cedeño was sent back down to the Triple-A Iowa Cubs. In 65 games at Iowa in 2005, Cedeño batted an impressive .355, and slugged over .500 for the first time in his professional career. He returned to the Cubs in June after Wilson was himself sent down to Iowa.

FULL ARTICLE AT WIKIPEDIA.ORG
This article is licensed under the GNU Free Documentation License.
It uses material from the Wikipedia article "Ronny Cedeno."
Back to Article
/