Music // 2 years ago
Lynyrd Skynyrd announce dates for farewell tour
Lynyrd Skynyrd has announced the final dates for their Street Survivors Farewell Tour that begins its final portion this summer. 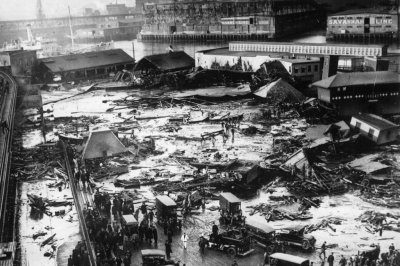 Top News // 3 years ago
The Almanac
On Jan. 15, 1919, 21 people were killed and scores injured when a vat holding 2.3 million gallons of molasses exploded and sent torrents of the syrup into the streets of Boston.

Ronald Wayne "Ronnie" Van Zant (January 15, 1948 – October 20, 1977) was the lead vocalist, primary lyricist, and a founding member of the Southern rock band Lynyrd Skynyrd. He was the older brother of the founder and vocalist of 38 Special, Donnie Van Zant, and of current Lynyrd Skynyrd lead vocalist Johnny Van Zant.

Born and raised in Jacksonville, Florida, to Lacy (1915–2004) and Marion (1929–2000) Van Zant. Van Zant aspired to be many things before finding his love for music. Notably, Ronnie was interested in becoming a boxer (as Muhammad Ali was one of his idols) and in playing professional baseball. Ronnie also tossed around the idea of becoming a stock-car racer. In fact, he would say that he was going to be the most famous person to come out of Jacksonville since Lee Roy Yarbrough.

Van Zant formed Skynyrd late in the summer of 1964 with friends and schoolmates Allen Collins (guitar), Gary Rossington (guitar), Larry Junstrom (bass), and Bob Burns (drums). Lynyrd Skynyrd's name is a mock tribute to a gym teacher the boys had in high school, Leonard Skinner, who disapproved of male students with long hair.

FULL ARTICLE AT WIKIPEDIA.ORG
This article is licensed under the GNU Free Documentation License.
It uses material from the Wikipedia article "Ronnie Van Zant."
Back to Article
/