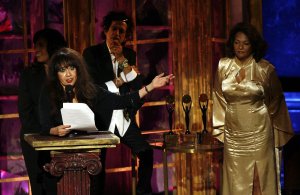 Entertainment News // 4 months ago
Ronnie Spector, Ronettes leader and '60s icon, dies at 78
Ronnie Spector, the vocalist who led the 1960s pop group the Ronettes and produced the classic hits "Walking in the Rain" and "Be My Baby," died Wednesday, her family announced. She was 78.

Top News // 5 years ago
The Almanac
On Aug. 10, 1920, Francisco "Pancho" Villa surrendered to Mexican authorities -- and drowned his sorrows in a bottle of cognac.
Odd News // 8 years ago
The almanac
UPI Almanac for Saturday, Aug. 10, 2013.
Odd News // 9 years ago
The almanac
UPI Almanac for Friday, Aug. 10, 2012.
Entertainment News // 1 decade ago
Ronettes singer Estelle Bennett dead at 67
Singer Estelle Bennett, one of the original members of the 1960s girl group the Ronettes, has died at the age of 67, said her sister, Ronnie Spector.
Entertainment News // 1 decade ago
Springsteen surprises benefit crowd
The audience at a New York benefit for young musicians went home with an unexpected memory when rocker Bruce Springsteen gave a surprise performance.
Entertainment News // 1 decade ago
R.E.M. salutes entire Rock Hall class
The gracious salute by R.E.M to other Rock and Roll Hall of Fame inductees at a New York ceremony was typical of the good vibes all around.
Odd News // 1 decade ago
Victim in Phil Spector shooting identified
Police have identified the woman who was shot and killed Monday at the Alhambra home of record producer Phil Spector as Lana Clarkson, 40, of Los Angeles.

Ronnie Spector (born Veronica Yvette Bennett on 10 August 1943 in New York, New York) is an American musician, and was the lead singer of the girl group The Ronettes. She is known as the "original bad girl of rock and roll."

From a young age, Bennett took to singing, encouraged by her large, close family. The other members of the Ronettes, Ronnie's sister Estelle Bennett (1941-2009) and cousin Nedra Talley, were also encouraged to sing by their family. The Ronettes were a multiracial group, which was unusual during the 1960s. The Bennetts' mother was African-American and Native American; their father was Irish. In her autobiography, Ronnie Spector said that at one point in her childhood, she was not sure if she was black or white.

Bennett was married to Phil Spector from 1968 to 1974, and took his name professionally. They adopted three children. Phil adopted Gary and Louis as a single parent after Ronnie left.

FULL ARTICLE AT WIKIPEDIA.ORG
This article is licensed under the GNU Free Documentation License.
It uses material from the Wikipedia article "Ronnie Spector."