Top News // 8 months ago
The Almanac
On Feb. 1, 2003, the space shuttle Columbia broke apart during its descent over the southwestern United States. All seven astronauts aboard were killed.

TV // 1 year ago
'Total Divas' to return Oct. 2 with Ronda Rousey
WWE announced Monday that "Total Divas Season 9" will premiere on E! on Oct. 2 and feature Ronda Rousey as a series regular. 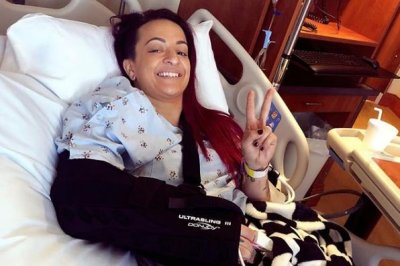 TV // 1 year ago
Jenna Dewan tells John Cena she has become a WWE fan on 'Ellen'
Jenna Dewan explained to "Ellen" guest host John Cena on Friday that her boyfriend Steve Kazee has turned her into a professional wrestling fan.

I appreciate the concerns about my health, but I'm fine. As I had mentioned before, I'm going to take a little time, but I'll be back

Ronda Jean Rousey (/ˈraʊzi/; born February 1, 1987) is an American mixed martial artist, judoka and actress. She is the first and current UFC Women's Bantamweight Champion,[6] as well as the last Strikeforce Women's Bantamweight Champion. She is undefeated in mixed martial arts, having won eleven of her twelve fights in the first round[7] and nine by armbar.[8] Rousey was the first U.S. woman to earn an Olympic medal in Judo at the Summer Olympics in Beijing in 2008.[9]

FULL ARTICLE AT WIKIPEDIA.ORG
This article is licensed under the GNU Free Documentation License.
It uses material from the Wikipedia article "Ronda Rousey."
Back to Article
/