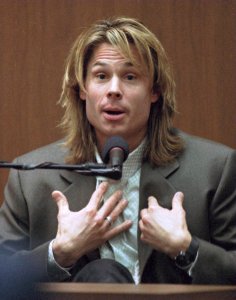 Top News // 2 years ago
On This Day: Ahmadinejad declared president of Iran
On June 13, 2009, incumbent Mahmoud Ahmadinejad was declared the winner in a disputed Iranian presidential election.

TV // 5 years ago
Sterling K. Brown recalls hearing Simpson verdict at college: 'Black students rejoiced'
Sterling K. Brown says he vividly remembers where he was and how he felt when O.J. Simpson was acquitted of double homicide after a racially charged trial.

Ronald Lyle "Ron" Goldman (July 2, 1968 – June 12, 1994) was an American model. He was murdered in 1994 along with Nicole Brown Simpson, former wife of O. J. Simpson, an actor and retired American football player. The subsequent criminal investigation and trial against O. J. Simpson was described by some as the "trial of the century." Although Simpson was acquitted during the criminal trial, he was later held liable for Goldman's death and that of his ex-wife in a 1997 civil trial.

Goldman grew up in Buffalo Grove, Illinois, and was raised by his father, Fred Goldman. Both his father and mother, Sharon Rufo, are Jewish.

He attended high school at Adlai E. Stevenson High School in Lincolnshire, Illinois. He was a student at Illinois State University for one semester and a pledge to Sigma Nu fraternity before he moved with his family to California. While living in Los Angeles, he attended Pierce College. He had been supporting himself as a waiter and tennis instructor. According to a book authored by some of his family members, titled His Name is Ron, before working at the restaurant Mezzaluna, Goldman worked with cerebral palsy patients. Goldman was a contestant on the short-lived game show Studs in 1992. Goldman had also doodled plans for a bar and restaurant to be named ANKH, after the Egyptian religious symbol. He was active in the Jewish community.

FULL ARTICLE AT WIKIPEDIA.ORG
This article is licensed under the GNU Free Documentation License.
It uses material from the Wikipedia article "Ronald Goldman."
Back to Article
/