U.S. News // 6 years ago
New U.S. attorney general to visit Baltimore
Newly confirmed Attorney General Loretta Lynch will travel to Baltimore on Tuesday to sit down with city and state lawmakers and faith and community leaders.

U.S. News // 6 years ago
Peaceful Freddie Gray protesters fill streets of Baltimore
Protesters largely promoted peace and a show of unity Wednesday in Baltimore as a large march was held from Penn Station to City Hall. 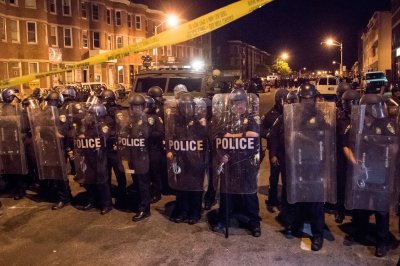 Born in Santa Monica, California, he was raised in Cheyenne, Wyoming. In 1955-56 he attended the University of Wyoming. In 1959 at the age of 22 became interested in painting. In 1960-64 he attended the San Francisco Art Institute. Abstract Expressionism, the prevailing artistic movement of the time, would have an influence on many of his future works. In 1962 he was a Yale-Norfolk Summer School Grantee. In 1963 his paintings became hard-edged, geometric and optical in style, and by 1964 his works were shown in important museums and galleries. Lived and worked in Los Angeles, CA, 1965-71; Malibu, CA, 1972-1990. Moved to Arroyo Hondo, New Mexico on the outskirts of Taos, New Mexico in 1991-present.

Ronald Davis from the earliest days of his career had a significant impact on contemporary abstract painting of the mid-1960s. According to art critic Michael Fried: Ron Davis is a young California artist whose new paintings, recently shown at the Tibor de Nagy Gallery in New York, are among the most significant produced anywhere during the past few years, and place him, along with Stella and Bannard, at the forefront of his generation. He had his first one person exhibition at the Nicholas Wilder Gallery in Los Angeles in 1965.

FULL ARTICLE AT WIKIPEDIA.ORG
This article is licensed under the GNU Free Documentation License.
It uses material from the Wikipedia article "Ronald Davis."
Back to Article
/