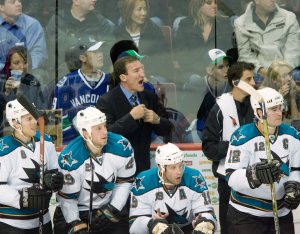 Needless to say, it is quite an honor to have the opportunity to coach our Olympic team in Vancouver and also our team in the upcoming World Championship

He moves the puck better than most guys in the league

It was something we had never seen before, but we know a lot about them now

Ronald Lee Wilson (born 13 May 1956 in Toronto, Ontario) is a former professional ice hockey centreman. Currently Wilson is the associate coach of the Chicago Wolves of the American Hockey League. He was hired to this job on Oct. 22, 2009.

Wilson was drafted 133rd overall by the Montreal Canadiens in the 1976 NHL Amateur Draft. He played 832 career NHL games, scoring 110 goals and 216 assists for 326 points and amassing 415 penalty minutes. Wilson coached the Hamilton Bulldogs of the American Hockey League, before being relieved of his duties on June 22, 2009.

FULL ARTICLE AT WIKIPEDIA.ORG
This article is licensed under the GNU Free Documentation License.
It uses material from the Wikipedia article "Ron Wilson."
Back to Article
/