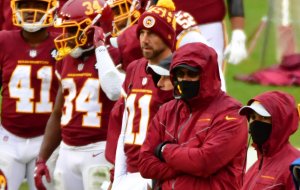 NFL // 4 months ago
Steelers quarterback Dwayne Haskins dies at 24
Dwayne Haskins, the 24-year-old quarterback for the Pittsburgh Steelers, died Saturday morning while in Florida to train with other members of the team.

NFL // 7 months ago
Jalen Hurts totals 3 scores, leads Eagles over Washington
Jalen Hurts rushed for two scores and threw a touchdown pass to lead the Philadelphia Eagles to a 10-point comeback and an NFC South division victory over the Washington Football Team.

Ronald Eugene Rivera (born January 7, 1962) is the head coach of the NFL's Carolina Panthers. Rivera was a linebacker on the 1985 Chicago Bears, who won Super Bowl XX. Rivera was the defensive coordinator for the 2006 Chicago Bears, who won the National Football Conference championship and competed in Super Bowl XLI. He was the defensive coordinator for the San Diego Chargers prior to being named coach of the Panthers.

Rivera learned under coaches who favor aggressive defensive philosophies, such as Buddy Ryan, Jim Johnson and Lovie Smith. He used to employ the 4-3 defensive scheme, but adopted a 3-4 defense as Chargers defensive coordinator.

Rivera was born in Fort Ord, California. His father was a Puerto Rican commissioned officer in the United States Army stationed in California. There he met his future wife, Rivera's mother of Mexican heritage. As a result of his father's military service, Rivera had to travel and was educated in military bases in Germany, Panama, Washington, D.C., and Maryland. Finally his family moved to central California. There, he attended Seaside High School, where he first started playing football.

FULL ARTICLE AT WIKIPEDIA.ORG
This article is licensed under the GNU Free Documentation License.
It uses material from the Wikipedia article "Ron Rivera."