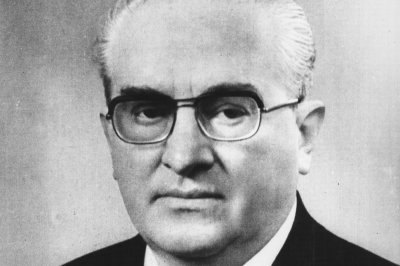 Roger Mudd (born February 9, 1928) is an Emmy Award-winning U.S. television journalist and broadcaster, most recently as the primary anchor for The History Channel. Previously, Mudd was weekend and weekday substitute anchor of CBS Evening News, co-anchor of the weekday NBC Nightly News, and hosted NBC's Meet the Press, and NBC's American Almanac television newsmagazine. Mudd is the recipient of the Peabody Award, the Joan Shorenstein Award for Distinguished Washington Reporting, and five Emmy Awards.

Mudd was born in Washington, D.C., the son of Irma Iris (née Harrison) and Kostka Mudd. He received a B.A. degree from Washington and Lee University in 1950 and a Master's degree from the University of North Carolina at Chapel Hill in 1951. He began his journalism career in Richmond, Virginia as a reporter for the The Richmond News Leader and for radio station WRNL. He moved to Washington, DC in the late 50's to become a reporter with WTOP News, the news division of the radio and television stations owned by Post-Newsweek. Although WTOP News was a local news department, it covered many national stories. CBS News was located on the third floor of WTOP's studios at 40th and Brandywine in NW Washington. Mudd quickly came to the attention of CBS News and moved "downstairs" to join the Washington bureau in 1961.

For most of his career at CBS, Mudd was a Congressional correspondent. He also was anchor of the Saturday edition of the Evening News and frequently substituted on the weeknight broadcasts when anchor Walter Cronkite was on vacation or working on special assignments. Mudd also covered numerous political campaigns. He was paired with co-anchor Robert Trout in the 1964 political convention anchor booth, temporarily displacing Walter Cronkite, in an unsuccessful attempt to match the popular NBC Huntley-Brinkley anchor team. He covered the 1968 Presidential campaign of Senator Robert F. Kennedy and was in the Ambassador Hotel in Los Angeles when Kennedy was shot on June 5, 1968.

FULL ARTICLE AT WIKIPEDIA.ORG
This article is licensed under the GNU Free Documentation License.
It uses material from the Wikipedia article "Roger Mudd."
Back to Article
/