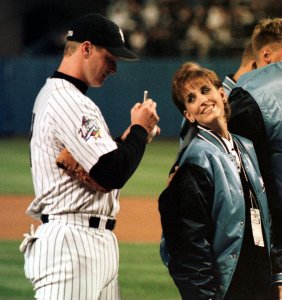 MLB // 3 years ago
Giancarlo Stanton breaks Miami Marlins' homer record in win over San Francisco Giants
Dee Gordon, normally quiet around the media, strutted into the interview room and started talking happily even before the first question was asked.

MLB // 3 years ago
Burgeoning legend easy to Judge: New York Yankees phenom Aaron Judge shining
The world doesn't stop turning when Aaron Judge steps to the plate these days at Yankee Stadium. It only feels like it.

Roger Eugene Maris (September 10, 1934 – December 14, 1985) was an American right fielder in Major League Baseball who is primarily remembered for breaking Babe Ruth's single-season home run record of 60 home runs in the 1927 season, with 61 in 1961, a record that would stand for 37 years. In 12 Major League seasons, he played in seven World Series and won three championships.

The son of Croatian immigrants, he was born Roger Eugene Maras (he later changed his last name to Maris) in Hibbing, Minnesota. He grew up in Grand Forks and Fargo, North Dakota where he attended Shanley High School. A gifted athlete, Maris participated in many sports while in Fargo, and excelled at football. He still holds the official high school record for most kickoff return touchdowns in a game with four.

At an early age, Maris exhibited an independent, no-nonsense personality. Recruited to play football at the University of Oklahoma, he arrived by bus in Norman and found no one from the university there to greet him. He turned around and went back to Fargo.

FULL ARTICLE AT WIKIPEDIA.ORG
This article is licensed under the GNU Free Documentation License.
It uses material from the Wikipedia article "Roger Maris."
Back to Article
/