NFL // 3 years ago
Roddy White 'would've fought' Kyle Shanahan for Super Bowl 51 play calling
When you look at all-time great players for the Atlanta Falcons, Roddy White's name is near the top of the list. 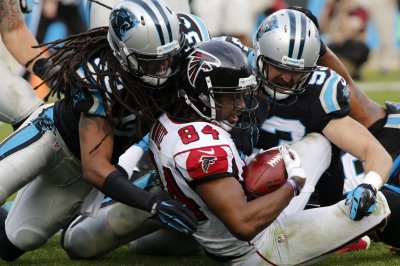 Sports News // 4 years ago
Sean Payton's future as clear as a bayou marsh
METAIRIE, La. -- On Black Monday, when NFL coaches and front-office executives come and go at an alarming rate, all was quiet for the New Orleans Saints.

Sharod Lamor White (born November 2, 1981) is an American football wide receiver playing for the Atlanta Falcons in the National Football League. He was selected with the 27th pick overall in the 2005 NFL Draft out of UAB.

White attended James Island Charter High School in James Island, South Carolina, and was a four-sport letterman and standout in football, baseball, soccer, and wrestling. In football, he was a two-time All-Low Country honoree, a two-time All-State honoree, and was also listed as one of the top receivers in the nation on Rivals.com. In wrestling, he was a two-time state champion often pinning his opponent in a move that was coined the "Shanaz". White attended University of Alabama at Birmingham (UAB), where he was a standout wide receiver.

White saw instantaneous action in his rookie campaign. He ranked fourth among all rookie receivers in 2005. Although a high ankle sprain caused him to remain on the sidelines for much of the preseason, he recovered by Week 2 of the 2005 season and was put on the team's roster. In Week 4 of the 2005 season, against the Minnesota Vikings, he was inserted in the lineup as the No. 3 receiver. During the course of the game he racked up 64 yards on 5 catches. However, during the rest of the season, his performance was spotty at best. He made a fantastic leaping catch over three defenders on a trick play against the New Orleans Saints during Week 14 for a 54-yd touchdown, but dropped a touchdown catch the next week against the Tampa Bay Buccaneers, although he had a 108-yard receiving performance vs. Tampa Bay (11/20) which was the second-highest receiving total put up by a rookie wide receiver in 2005, only surpassed by Jaguars WR Matt Jones (117 yards vs. Baltimore).

FULL ARTICLE AT WIKIPEDIA.ORG
This article is licensed under the GNU Free Documentation License.
It uses material from the Wikipedia article "Roddy White."
Back to Article
/