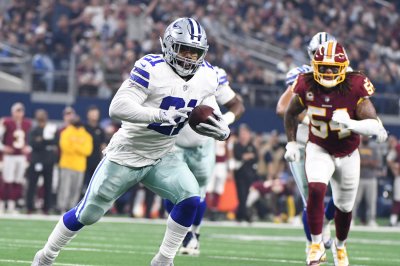 NFL // 3 years ago
2018 NFL mock draft: Top QB crop since famed 1983 class?
NFL teams needing help at quarterback will have no excuses this year with a crop of talent worthy of comparison to even the renowned Class of 1983.

NFL // 3 years ago
NFL Draft: Underclassmen add to 2018 intrigue
A record number of underclassmen opted to make themselves available for the 2018 NFL draft, boosting an already-solid class into an historic group, especially boosted at quarterback, running back, linebacker and cornerback.

We have agreed to terms on a contract with Daunte Culpepper, pending completion of a non-orthopedic physical

Rodney (Rod) Marinelli (born July 13, 1949 in Rosemead, California) is the defensive line coach and assistant head coach of the Chicago Bears. He is the former head coach of the Detroit Lions. He was fired from his position as head coach on December 29, 2008, one day after coaching the Lions to the worst single-season record in NFL history, 0–16.

Marinelli's coaching career began in 1973 as an assistant at Rosemead High School in suburban Los Angeles from 1973 to 1975. He earned his first collegiate job in 1976, serving as an assistant at Utah State University until 1982. He then moved on to the University of California for nine seasons, serving as the defensive line coach and later the assistant head coach. He was then on staff with Arizona State University for three seasons, again holding a dual role as defensive line and assistant head coach, between 1992 and 1994. Marinelli spent his final year in college football at University of Southern California in 1995.

Marinelli went to the Tampa Bay Buccaneers in 1996 and was the defensive line coach for ten seasons under head coach Tony Dungy. The latter four seasons he also served as assistant head coach. He was known for his strict disciplinary style and his commitment of trying to get the most out of his players. There he worked to develop lineman such as Warren Sapp and Simeon Rice into Pro Bowl caliber players. During Marinelli's tenure in Tampa Bay, the Buccaneers earned more sacks than any other franchise.

FULL ARTICLE AT WIKIPEDIA.ORG
This article is licensed under the GNU Free Documentation License.
It uses material from the Wikipedia article "Rod Marinelli."
Back to Article
/