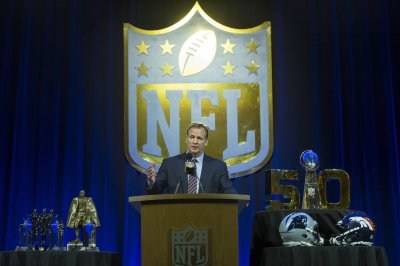 Sports News // 4 years ago
Congressional report: NFL tried to influence CTE study
The House Committee on Energy and Commerce has found in a 91-page report that the NFL improperly tried to influence a study regarding the detection of chronic traumatic encephalopathy, or CTE, in living patients.

Health News // 4 years ago
Repeated hits to head bigger football threat than concussions
Repeated concussions pose a significant danger to football players, but the overall number of impacts on a players head is a much greater health risk.

Sports News // 5 years ago
NFL reportedly pulls $30M funding for brain injury study
A study conducted by the National Institutes of Health on the relationship between football and brain disease will move forward without a $30 million research grant from the NFL.

Health News // 6 years ago
Promising Alzheimer's research stalled by lack of volunteers for studies
Scientists worry the pace Alzheimer's research is too slow, and that the race for a cure is a distraction from the need to develop more effective treatments.
Health News // 9 years ago
NFL legend suffered brain damage
A former member of the Buffalo Bills, Cookie Gilchrist, had a neurodegenerative disease that caused cognitive decline and behavioral problems, researchers say.
U.S. News // 9 years ago
George W. Bush library to mark a milestone
Former President George W. Bush expressed his pleasure Monday at the progress being made in building his presidential library in Texas.
Top News // 1 decade ago
LA worker's send-off party worries critic
A Los Angeles city official may have unintentionally used his position to influence others to attend his retirement party, a critic says.
Odd News // 1 decade ago
Watercooler Stories
Battered-looking steps could be great art ... Swiss make play for World Cup widows ... Political couple consulted each other ... No-fly list keeps Marine off plane ... Watercooler stories from UPI.
Odd News // 1 decade ago
Political couple consulted each other
Two California politicians who are married to each other say they broke no laws when each collected consulting fees from the other's campaign organization.

Political couple consulted each other Apr 13, 2006

Robert Arthur Morton Stern, usually credited as Robert A. M. Stern, (born May 23, 1939) is an American architect and Dean of the Yale University School of Architecture.

His work is generally classified as postmodern, though a more useful classification would be a particular emphasis on context and the continuity of traditions. He may have been the first architect to use the term "postmodernism", but more recently he has used the phrase "modern traditionalist" to describe his work.

He received a bachelor's degree from Columbia University in 1960 and a master's degree in architecture from Yale University in 1965. After graduating from Yale, Stern worked as a designer in the office of Richard Meier in 1966, prior to forming the firm of Stern & Hagmann with a fellow student from his days at Yale, John S. Hagmann, in 1969. In 1977 he founded the successor firm, Robert A. M. Stern Architects. Before becoming architecture dean at Yale, he was professor of architecture at Columbia and director of Columbia's Temple Hoyne Buell Center for the Study of American Architecture.

FULL ARTICLE AT WIKIPEDIA.ORG
This article is licensed under the GNU Free Documentation License.
It uses material from the Wikipedia article "Robert Stern."
Back to Article
/