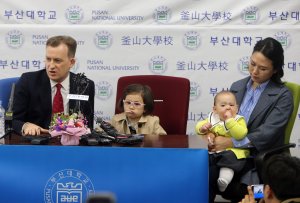 U.S. News // 2 years ago
R. Kelly loses bid for temporary prison release due to COVID-19 fears
A federal judge on Tuesday ruled that R. Kelly had not established "compelling reasons" to be granted temporary release from prison due to the COVID-19 outbreak.

Odd News // 4 years ago
Live TV interview interrupted by man's 5-year-old son
A film expert being interviewed live via video chat on a cable news network found his segment derailed when his 5-year-old son put in an appearance.

U.S. News // 4 years ago
Kelly, 'stunned' over Gold Star family accusation, opens up about son's death
John Kelly said he was "brokenhearted" a member of Congress criticized President Donald Trump for how he spoke to the widow of a slain U.S. soldier.

Entertainment News // 4 years ago
R. Kelly 'unequivocally denies' abusive cult allegations
R. Kelly is denying allegations that he is holding women against their will as part of an abusive cult inside his rented properties in Atlanta and Chicago.

Odd News // 5 years ago
Curious children videobomb father's BBC news interview
A professor was interrupted by his two young daughters while taking part in a video interview with BBC News.

If it happened the way she said it did, it's a miracle the baby is alive

Robert Edward Kelly is a fictional character in the Marvel Comics universe. He most often appears in Marvel's X-Men and X-Men-related comic books. He is a prominent United States Senator who began his career on an anti-mutant platform, and as the X-Men team is made up entirely of mutants, his role tends to be that of an antagonist. However, towards the latter days of his career, he began to change his views on mutants as a whole. The character was created by Chris Claremont and John Byrne and makes his first appearance in Uncanny X-Men #135 (July 1980).

Senator Robert Kelly was first seen at a social gathering hosted by the Hellfire Club, where an illusion projected by the mutant villain Mastermind caused him to believe he had witnessed the X-Man Cyclops firing randomly into a crowd. He was the primary backer of the Mutant Control Act and Project: Wideawake, a government program aimed at creating updated Sentinel robots that would help track down and, if necessary, detain or kill violent mutants.

He played a central role in the Days of Future Past storyline that took place in Uncanny X-Men #141-142 (January–February 1981). The entire plot revolved around the X-Men stopping Mystique and her Brotherhood of Evil Mutants from assassinating Senator Kelly and thus inadvertently causing a dystopian future where mutants and other heroes were hunted down and nearly totally eliminated.

FULL ARTICLE AT WIKIPEDIA.ORG
This article is licensed under the GNU Free Documentation License.
It uses material from the Wikipedia article "Robert Kelly."