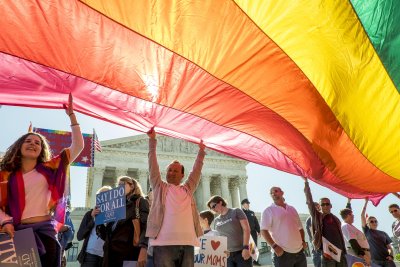 U.S. News // 3 years ago
Washington state court rules for gay couple in wedding flower case
The Washington state Supreme Court ruled 9-0 that a Christian florist could not use her faith to justify refusing service for a gay couple's wedding.

Born in San Francisco, Aitken studied there at the Mark Hopkins Institute of Art with Douglas Tilden. From 1901 until 1904 he was an instructor at the Institute. In 1904 he moved to Paris where he continued his studies. He returned to New York City after his sojourn in Paris and was employed as an instructor at the Art Students League.

His works include the Science fountain and Great Rivers statues at the Missouri State Capitol, the "Iron Mike" statue at Parris Island, South Carolina, several military sculptures at West Point, the Temple of Music and the Dewey Monument in San Francisco, California, and sculptural works for the Liberty Memorial in Kansas City, Missouri. Aitken also produced the "Fountain of Earth" for San Francisco's Panama Pacific Exposition.

FULL ARTICLE AT WIKIPEDIA.ORG
This article is licensed under the GNU Free Documentation License.
It uses material from the Wikipedia article "Robert Ingersoll."
Back to Article
/