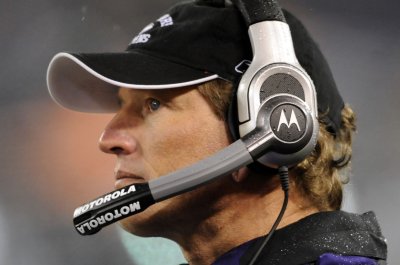 NFL // 2 years ago
Neuheisel: Nothing finalized with AAF coaching job
CBS broadcaster Rick Neuheisel downplayed a report that he will be the next coach hired by the Alliance for American Football.

The Bruin family sends our deepest, heartfelt sympathy to the Cornish family

To my knowledge, I am still the coach at Washington

Even with a 17-0 lead, we were not playing well and we weren't clicking

Although he was confined to his wheelchair, Curtis taught all of us associated with Husky football the true meaning of the word courage

In Sports from United Press International May 07, 2002

Everyone in the Husky family, the coaches, the players, our staff and our fans, we are all deeply saddened by Curtis' death

In Sports fromUnited Press International May 06, 2002

Before the UCLA coaching job, he was the offensive coordinator for the NFL's Baltimore Ravens, after being promoted from quarterbacks coach following the 2006 NFL season.

He has been linked to several recruiting and other NCAA violations during his time at Colorado and Washington universities. He was the head coach for the Colorado Buffaloes football team as well as the Washington Huskies football team. He coached the Huskies to a victory in the 2001 Rose Bowl. He was fired from Washington in 2003 for betting on the 2003 NCAA Men's Division I Basketball Tournament in a bracket pool.

FULL ARTICLE AT WIKIPEDIA.ORG
This article is licensed under the GNU Free Documentation License.
It uses material from the Wikipedia article "Rick Neuheisel."
Back to Article
/