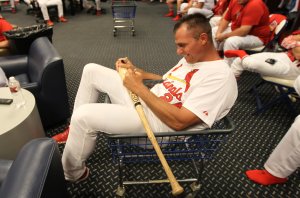 Richard Alexander Ankiel (pronounced /ˈæŋkiːl/; born July 19, 1979) is a Major League Baseball outfielder who is currently with the Washington Nationals. He bats and throws left-handed.

Ankiel was a pitcher with the St. Louis Cardinals from 1999 until 2001, when he lost his ability to throw strikes consistently. After trying to regain his pitching form in the minor leagues, he switched to the outfield in early 2005. For two and a half years, he honed his skills as a hitter and fielder in the Cardinals' minor-league system. He was called up to the Cardinals on August 9, 2007, and made his second major-league "debut"—this time as an outfielder in right field—against the San Diego Padres in St. Louis. As a Cardinal (1999–2009), Ankiel hit 47 home runs as an outfielder and two as a pitcher. After a 2009 season in which he hit .231 with 11 home runs in 122 games, Ankiel became a free agent. Subsequently, he was signed by the Royals and later was traded to the Atlanta Braves. He is the first player since Babe Ruth to have won at least 10 games as a pitcher and also hit at least 50 home runs. Ankiel is also the only player other than Babe Ruth to both start a postseason game as a pitcher and hit a home run in the postseason as a position player.

Rick attended Port St. Lucie High School in Florida, where he went 11–1 with a 0.47 ERA during his senior season, striking out 162 batters in 74.0 innings pitched, and was named the High School Player of the Year by USA Today in 1997. He was also a first-team high-school All-American pitcher.

FULL ARTICLE AT WIKIPEDIA.ORG
This article is licensed under the GNU Free Documentation License.
It uses material from the Wikipedia article "Rick Ankiel."
Back to Article
/