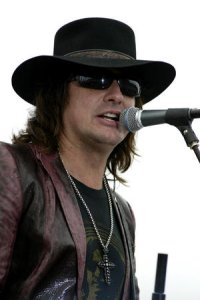 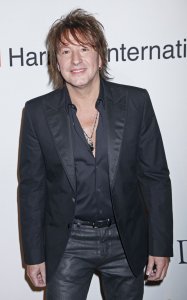 Entertainment News // 2 years ago
Diane Lane confirms she dated Jon Bon Jovi: 'I was 20'
"Justice League" actress Diane Lane shared details on "Watch What Happens Live" about her romance with Jon Bon Jovi in the 1980s.

Entertainment News // 3 years ago
Heather Locklear celebrates '30 years' with ex-husband Tommy Lee
Heather Locklear dedicated throwback photos to Tommy Lee on what would have been their 30th wedding anniversary.

He actually woke me up; `Man, get up! Something really crazy's going on,

Richard Stephen "Richie" Sambora (born July 11, 1959) is an American rock guitarist, producer, musician, singer/songwriter who is the longtime lead guitarist of the popular rock band Bon Jovi. He and frontman Jon Bon Jovi form the primary songwriting unit of the band. He is also a solo artist, having released two solo albums; Stranger in This Town in 1991, and Undiscovered Soul in 1998. Sambora was listed by Time magazine as one of the best guitarists of all time.

Sambora was born in Perth Amboy, New Jersey, the son of Joan, a secretary, and Adam, a factory foreman. Sambora is of Polish and Italian descent and was raised Catholic. He grew up in Woodbridge, New Jersey and attended Woodbridge High School there, graduating in 1977. He began playing the guitar at the age of 12 following the death of guitar legend Jimi Hendrix in 1970. From his early days Sambora was strongly influenced by blues and 60s rock 'n' roll. His most important influences were Eric Clapton, Jimi Hendrix, Jeff Beck, Stevie Ray Vaughan, Johnny Winter, Jimmy Page, Joe Perry and George Harrison. He was also influenced by Spanish classical music and began a life long love of the Spanish guitar. Furthermore, he has stated that psychedelic soul singer Janis Joplin crept into his heart very early in the late 60s and early 70s, having a big influence on his musical style. Classical music directly inspired several of his songs, such as The Answer which was originally written on piano.

Sambora played guitar for and auditioned for big-name bands Kiss and Poison (the latter of which was then named Paris). He was also a guitarist for the band Message, and with that band he gave out a record, which was re-released in 1995 under the name "Message", and in 2000 under the name "Lessons". Bon Jovi added Sambora to replace original lead guitarist Dave Sabo. Sambora went to a show and, after being impressed by Bon Jovi, approached him and informed him that he thought they should work together. They immediately hit it off as friends, and Sambora was invited to a rehearsal. By the time Bon Jovi arrived, the band was sounding better than ever and Sambora was hired on the spot.

FULL ARTICLE AT WIKIPEDIA.ORG
This article is licensed under the GNU Free Documentation License.
It uses material from the Wikipedia article "Richie Sambora."
Back to Article
/