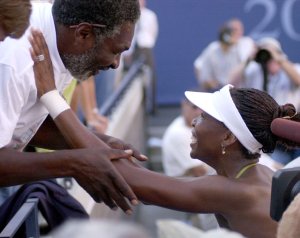 Tennis // 2 years ago
Serena Williams explains why dad didn't walk her down aisle at wedding
Serena Williams gave a behind-the-scenes look at her wedding and detailed her relationship with father Richard Williams in the newest episode of "Being Serena." 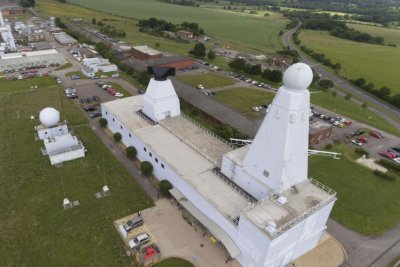 Energy News // 4 years ago
Baker Hughes streamlines structure
Oil services company Baker Hughes said structural and leadership changes were made in a way that it said could help simplify operations and lower costs.

Tennis // 4 years ago
Refocused Serena Williams makes case for being all-time best
NEW YORK -- How appropriately named. How incorrectly named. Serena. Serene, calm, composed, tranquil. At times, perhaps, but if anything, Serena Williams, arguably the best women's tennis player of all time, is feisty, and more than anything competitive.
U.S. News // 6 years ago
Truck driver charged in traffic deaths of N.J. mom, two sons
A New York City tractor-trailer rig driver faces charges in a vehicular accident that left a New Jersey mother and two sons dead, authorities said Saturday.
World News // 7 years ago
SAS ex-chief calls for sergeant's release
A former British special forces sergeant sentenced to prison for gun possession is the victim of a "travesty of justice," a former military commander says.
Top News // 1 decade ago
Judge: Va. violated overseas ballot laws
A U.S. district court judge ruled Monday that Virginia violated federal law when it mailed overseas absentee ballots too late to service members.
Science News // 1 decade ago
Nearly all Alaskan glaciers are thinning
The U.S. Geological Survey says nearly all Alaskan mountain range and island group glaciers are experiencing significant retreat, thinning or stagnation.
Top News // 1 decade ago
Racing publicist sentenced on sex charges
A former publicist for NASCAR was sentenced in North Carolina to 26 years in prison for having sex with an 11-year-old girl he met through the Internet.
Sports News // 1 decade ago
Williams sisters have a beef with the WTA
Richard Williams threatened legal action against the Women's Tennis Association if his daughters are forced to play at Indian Wells, Calif., in the future.

My ethical obligation as a prosecuting attorney is not only to zealously prosecute criminals, but also to be fair to those accused of a crime

Richard Williams (born on March 19, 1933 in Toronto, Ontario) is a Canadian animator. He is best known for serving as animation director on Disney/Amblin's Who Framed Roger Rabbit and for his unfinished feature film The Thief and the Cobbler. He was also a film title sequence designer and animator; his most famous works in this field included the title sequences to What's New, Pussycat? (1965), title and linking sequences in The Charge of the Light Brigade (1968). He also animated the eponymous cartoon feline for two of the later Pink Panther films.

Richard Williams emigrated from Toronto to Ibiza in 1953 and then to London in 1955. In 1958 he produced the work that boosted his career which won the BAFTA award in 1959 for Best Animated Film, The Little Island. In the Thames Television documentary "The Thief Who Never Gave Up", broadcast in the late 1980s, Williams credits animator Bob Godfrey with giving him his start in the business, "Bob Godfrey helped me...I worked in the basement and would do work in kind, and he would let me use the camera... a barter system". After his noted work in the mid-1960s he went on to direct the Academy Award-winning A Christmas Carol (1971), the full-length feature Raggedy Ann & Andy: A Musical Adventure (1977) and the Emmy-winning telefilm Ziggy's Gift (1982). He also served as director of animation on Who Framed Roger Rabbit (1988), winning two more Oscars for his work. He has written an acclaimed animation how-to book, "The Animator's Survival Kit", published in 2002 (expanded edition, 2009).

Richard Williams' magnum opus, a painstakingly hand-animated epic inspired by the Arabian Nights and with the production title The Thief and the Cobbler, was begun in 1968 and was initially self-funded. As a largely non-verbal feature meant for an adult audience, The Thief was initially dismissed as unmarketable. After over twenty years of work, Williams had completed only twenty minutes of the film, and following the critical success of Who Framed Roger Rabbit, Williams sought and secured a production deal with Warner Bros. in 1990. However, the production went over deadline, and in 1992, with only 15 minutes left to complete, The Completion Bond Company, who had insured Warners' financing of the film, feared competition from the similarly themed Disney film Aladdin and seized the project from Williams in Camden, London. Completion Bond then had the animation completed in Korea under the direction of animator Fred Calvert. New scenes were also animated to include several musical interludes. Calvert's product was released internationally in 1994 as The Princess and the Cobbler. Miramax then acquired rights to the project and extensively rewrote and re-edited the film to include continuous dialogue, as well as many cuts to lengthy sequences. Miramax's product was released in 1995 under the title Arabian Knight. Ever since its release and negative reception, Williams prefers not to discuss the film at all. In 2006, a fan of William's work named Garrett Gilchrist released a bootleg DVD titled The Thief and the Cobbler: The Recobbled Cut with a restored version of the movie he made himself, mixing the original audio track, finished scenes, low quality images, pencil tests, and even pieces of the storyboard.

FULL ARTICLE AT WIKIPEDIA.ORG
This article is licensed under the GNU Free Documentation License.
It uses material from the Wikipedia article "Richard Williams."
Back to Article
/