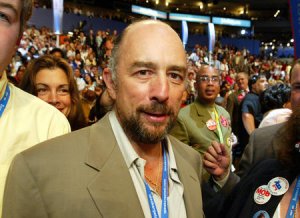 TV // 3 weeks ago
'The West Wing' cast to reunite for HBO Max special
"The West Wing" cast will perform together during a new special to promote voting in the 2020 presidential election.

TV // 2 years ago
ABC orders Season 2 of 'The Good Doctor'
ABC has renewed actor Freddie Highmore's "The Good Doctor" for a second season to air in 2018-19.

TV // 2 years ago
Sterling K. Brown 'would be honored' to star in 'West Wing' reboot
Sterling K. Brown says he would be 'honored' after "The West Wing" creator Aaron Sorkin suggested the actor for a potential revival of the show.

And the person said, 'Did you vote for him?' And McCain said, 'No,'

Richard Schiff (born May 27, 1955) is an American actor. He is best known for playing Toby Ziegler on the NBC television drama The West Wing, a role for which he received an Emmy Award. Schiff made his directorial debut with The West Wing, directing an episode entitled "Talking Points."

Schiff was born in Bethesda, Maryland, the second of three sons of Charlotte, a television and publishing executive, and Edward Schiff, a real estate lawyer. His parents divorced when he was 12. He dropped out of high school, but later obtained an equivalency diploma. In 1973, he studied briefly at The City College of New York (CCNY) but did not graduate. He moved to Colorado where he found employment cutting firewood. Returning to New York in 1975, he began to study acting at CCNY and was accepted into their Theater program.

Schiff met his wife Sheila Kelley during auditions for Antigone in 1993, and they married in 1996. They have a son, Gus, and a daughter, Ruby.

FULL ARTICLE AT WIKIPEDIA.ORG
This article is licensed under the GNU Free Documentation License.
It uses material from the Wikipedia article "Richard Schiff."
Back to Article
/