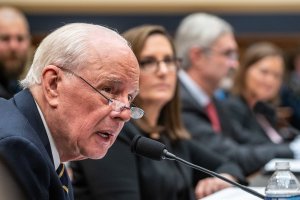 Top News // 1 month ago
On This Day: Skylab falls to Earth
On July 11, 1979, Skylab, the United States' first space station, fell to Earth after six years in orbit, scattering tons of debris across the Australian desert.

Sports News // 1 month ago
Title IX at 50: huge gains for women's sports, but more work to do
As Title IX marks its 50th anniversary, supporters credit the law for sparking more participation, profits and opportunities for women in sports. Critics say a cash-driven NCAA and those who ignore the law stymie growth.

Voices // 1 month ago
If Donald Trump were convicted, Joe Biden would have to consider a pardon
President Gerald Ford's pardon of Richard Nixon after the Watergate fiasco no doubt helped Jimmy Carter win the 1976 election. But Ford was right then and right now.

U.S. News // 1 month ago
Watergate at 50: System worked in ousting Nixon, but lack of reform led to Trump
Fifty years ago, police arrested five men at the Watergate office building, uncovering a political scandal the likes of which haven't been seen until the fallout of the Jan. 6, 2021, insurrection at the U.S. Capitol.

If you'd know the value of money, go and borrow some

If he made some mistakes, it was because he was a challenged man

If all goes as planned, the old Nixon library is basically going out of business

In Saigon the tendency is to fight the war to victory

Nixon was born in Yorba Linda, California. After completing his undergraduate work at Whittier College, he graduated from Duke University School of Law in 1937 and returned to California to practice law. He and his wife, Pat Nixon, moved to Washington to work for the federal government in 1942. He subsequently joined the United States Navy, serving in the Pacific Theatre during World War II. Nixon was elected to the House of Representatives in 1946 and to the Senate in 1950. His pursuit of the Hiss Case established his reputation as a leading anti-communist, and elevated him to national prominence. He was the running mate of Dwight D. Eisenhower, the Republican Party presidential nominee in the 1952 election, the first of five national nominations he received from his party, a record he shares with Franklin Roosevelt. Nixon served for eight years as vice president, traveling extensively and undertaking major assignments from Eisenhower. Nixon waged an unsuccessful presidential campaign in 1960, narrowly losing to John F. Kennedy, and lost a race for Governor of California in 1962. Following these defeats, he announced his withdrawal from political life. However, in 1968 he ran again for the presidency and was elected.

American involvement in Vietnam was widely unpopular; although Nixon initially escalated the war there, he subsequently moved to end US involvement, completely withdrawing American forces by 1973. Nixon's ground-breaking visit to the People's Republic of China in 1972 opened diplomatic relations between the two nations, and he initiated détente and the Anti-Ballistic Missile Treaty with the Soviet Union the same year. In domestic policy, his administration generally sought to transfer power from Washington to the states. In an attempt to slow inflation, Nixon imposed wage and price controls. He enforced desegregation of Southern schools and established the Environmental Protection Agency. Though he presided over Apollo 11, the culmination of the project to land a person on the moon, he scaled back manned space exploration. He was reelected by a landslide in 1972.

FULL ARTICLE AT WIKIPEDIA.ORG
This article is licensed under the GNU Free Documentation License.
It uses material from the Wikipedia article "Richard Nixon."