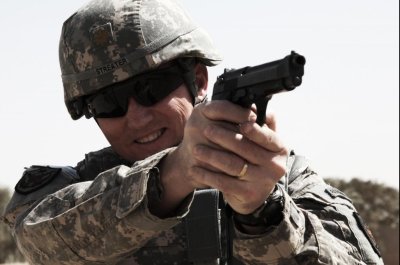 Richard Jackson is an American contemporary artist born in 1939 in Sacramento. He now lives in Los Angeles, CA. He studied Art and Engineering at Sacramento State College from 1959 - 1961 and taught Sculpture and New Forms at UCLA Los Angeles 1989 - 1994. Since the seventies Jackson has developed in his work an interrogation of painting that combines conceptual procedures, humour and extreme disorder. He expands the acitivity of painting, abandons its traditional instruments for machines, vehicles and everyday objects. For this reason he has been referred to as a neo-dadaist.

Jackson has brought the material dimensions of painting to extremes. "Big Ideas" from 1981 consisted in hundreds of painted canvases stacked into a sphere of 5 meters diameter. His exhibition, The Maid's Room / The Dining Room (2007) is a tribute to Marcel Duchamp's last major work: Etant donnés.

FULL ARTICLE AT WIKIPEDIA.ORG
This article is licensed under the GNU Free Documentation License.
It uses material from the Wikipedia article "Richard Jackson."
Back to Article
/