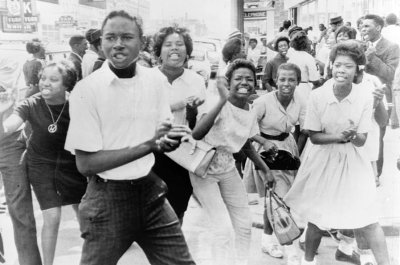 Top News // 3 years ago
The Almanac
On May 11, 1963, bombings in Birmingham, Ala., against non-violent civil rights campaigners trigger a crisis which leads to the involvement of federal troops.
Odd News // 6 years ago
The Almanac
UPI Almanac for Sunday, May 11, 2014
Odd News // 7 years ago
The almanac
UPI Almanac for Saturday, May 11, 2013.
Odd News // 8 years ago
The almanac
UPI Almanac for Friday, May 11, 2012.
Science News // 1 decade ago
Advanced electron microscope is installed
U.S. physicists have installed the world's most powerful transmission electron microscope, which produces images of less than half a 10-billionth of a meter.
Science News // 1 decade ago
Scientists to be featured on new stamps
Four American scientists, including three Nobel Prize winners, will be featured on 37-cent stamps beginning in April, the U.S. Postal Service announced Friday.
Science News // 1 decade ago
Nanoscience community honors its own
Nanotechnology is a term just beginning to receive public attention, but the top researchers and communicators in the scientific discipline already have awards to strive for and the latest group of winners was named Sunday at a conference.
Science News // 1 decade ago
Stories of modern science ... from UPI
University of Wisconsin-Madison scientists have created an atomic-scale memory using atoms of silicon, a free computer program developed by a Johns Hopkins University civil engineering researcher allows designers to test the stability and safety of a buil

It's because the signal-to-noise ratio is so good that you can adjust focus atom by atom, with enough sensitivity to obtain information about the three-dimensional atomic structure of a single nanoparticle

Richard Phillips Feynman (pronounced /ˈfaɪnmən/; May 11, 1918 – February 15, 1988) was an American physicist known for the path integral formulation of quantum mechanics, the theory of quantum electrodynamics and the physics of the superfluidity of supercooled liquid helium, as well as work in particle physics (he proposed the parton model). For his contributions to the development of quantum electrodynamics, Feynman received the Nobel Prize in Physics in 1965, together with Julian Schwinger and Sin-Itiro Tomonaga. Feynman developed a widely used pictorial representation scheme for the mathematical expressions governing the behavior of subatomic particles, which later became known as Feynman diagrams. During his lifetime and after his death, Feynman became one of the most publicly known scientists in the world.

He assisted in the development of the atomic bomb and was a member of the panel that investigated the Space Shuttle Challenger disaster. In addition to his work in theoretical physics, Feynman has been credited with pioneering the field of quantum computing, and introducing the concept of nanotechnology (creation of devices at the molecular scale). He held the Richard Chace Tolman professorship in theoretical physics at Caltech.

Feynman was a keen popularizer of physics in both his books and lectures, notably a 1959 talk on top-down nanotechnology called There's Plenty of Room at the Bottom, and The Feynman Lectures on Physics. Feynman is also known for his semi-autobiographical books Surely You're Joking, Mr. Feynman! and What Do You Care What Other People Think?, and through books about him, such as Tuva or Bust! He was also known as a prankster, juggler, safecracker, and a proud amateur painter and bongo player. Richard Feynman was regarded as an eccentric and a free spirit. He liked to pursue multiple, seemingly unrelated, paths, such as biology, art, percussion, Maya hieroglyphs, and lock picking.

FULL ARTICLE AT WIKIPEDIA.ORG
This article is licensed under the GNU Free Documentation License.
It uses material from the Wikipedia article "Richard Feynman."
Back to Article
/