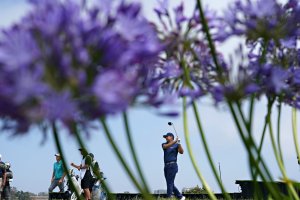 Sports News // 3 months ago
Hughes, Oosthuizen, Henley lead entering U.S. Open final round
Mackenzie Hughes, Louis Oosthuizen and Russell Henley were locked in a three-way tie atop the leaderboard after the third round of the U.S. Open golf tournament Saturday at Torrey Pines in San Diego.

An earlier Richard Bland, father of the subject of this article, was a member of one of the main patriarchal First Families of Virginia, and was related to many of the others. This branch of the Bland family first came to Virginia in 1654, when Theodorick (1629–1671) emigrated from London. He established Berkeley Plantation and Westover Plantation on the bank of the James River. He served several terms in the House of Burgesses, and was its speaker in 1660 when he married Governor Richard Bennett's daughter, Anne. Before he died in 1671 they had three sons: Theoderick (1663–1700), Richard (1665–1720), and John (1681–1746).

Not being the eldest, Richard (the father of the subject of this article) moved further up the river and started his own plantation, which became known as Jordan's Point Plantation near the current Jordan Point in Prince George County, Virginia. His first wife was Mary Swann, but she died without living children. In 1702 he married Elizabeth Randolph (1680–1720). They would have five children: Mary (1703) married Henry Lee, Elizabeth (1706) married William Beverley, Richard (1710), Anna (1711) married Robert Munford, and Theodorick (1718) whose son, Theodorick Bland, also became a congressman and first commanded General Washington's "Virginia Cavalry." The Richard of this generation also served in the House of Burgesses.

FULL ARTICLE AT WIKIPEDIA.ORG
This article is licensed under the GNU Free Documentation License.
It uses material from the Wikipedia article "Richard Bland."
Back to Article
/