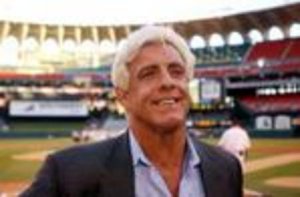 Entertainment News // 2 months ago
Batista, nWo with Hulk Hogan selected for WWE Hall of Fame
WWE announced on Monday that Batista and The nWo -- consisting of members Hollywood Hulk Hogan, Kevin Nash, Scott Hall and Sean Waltman -- will be inducted into the Hall of Fame.

Entertainment News // 2 months ago
Kevin Owens to interview Ric Flair at WWE Starrcade
WWE announced on Wednesday that living legend Ric Flair will be interviewed by Kevin Owens at the Starrcade event on Sunday.

TV // 4 months ago
WWE announces new show 'WWE Backstage' for FS1
WWE announced on Thursday that they will be bringing a new program titled "WWE Backstage" to FS1 beginning on Oct. 4.

Entertainment News // 4 months ago
WWE announces special Starrcade event for December
WWE is bringing back the iconic Starrcade name for a special event taking place on Dec. 1 at the Infinite Energy Center in Duluth, Ga.

Flair is recognized by World Wrestling Entertainment (WWE) as a 16-time World Heavyweight Champion (8-time NWA Champion, 6-time WCW Champion, and 2-time WWE Champion) although his actual tally of World Championship reigns varies by source - some totaling as high as 22. In World Championship Wrestling (WCW), he also had two stints as a booker—from 1989 to 1990 and again in 1994. Flair also won the 1992 Royal Rumble and was inducted into the WWE Hall of Fame in 2008. Flair ended his 36-year in-ring career in 2008 at WrestleMania XXIV. Flair has also appeared in the Ring of Honor promotion, serving as Ambassador. He returned to World Wrestling Entertainment on May 17, 2009 at the annual PPV Judgment Day.

Flair was born on February 25, 1949. Various places have been given for his birthplace. In his autobiography Flair claims he was born in Memphis, Tennessee. In the opening chapter of his autobiography To Be the Man, titled "Black Market Baby," he notes that his birth name is given on different documents as Fred. At the time of his adoption, his father was completing a residency in gynecology in Detroit. Shortly afterward, the family settled in Edina, Minnesota, where the young Richard Fliehr lived throughout his childhood. He later attended Wayland Academy, a coeducational boarding school in Beaver Dam, Wisconsin.

FULL ARTICLE AT WIKIPEDIA.ORG
This article is licensed under the GNU Free Documentation License.
It uses material from the Wikipedia article "Ric Flair."
Back to Article
/