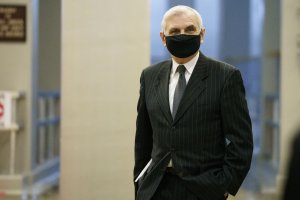 U.S. News // 1 month ago
Tax Day in America: Most in U.S. required to file 2020 returns by Monday
Monday is Tax Day in America -- the delayed deadline for most U.S. taxpayers to file their 2020 federal return, but individuals can still consider asking for an extension.

U.S. News // 1 month ago
Spring warmth to return to the Northeast, accompanied by showers, thunderstorms
After gusts of chilly air passed through the Northeast on Friday, temperatures are expected to recover this weekend and soar into next week, accompanied by bands of showers and storms.

Odd News // 1 month ago
Class ring lost at Rhode Island beach returned 39 years later
A Connecticut man who lost his high school class ring during a trip to the beach was reunited with the ring 39 years later when it was found in a woman's attic.

U.S. News // 1 month ago
Census: States in South, West gain House seats, but fewer than expected
Republican-dominated states in the U.S. South and West gained seats in the House of Representatives under U.S. Census Bureau population data released Monday, but not as many as they had hoped for.

Health News // 2 months ago
Study: States with high mask-wearing saw lower COVID-19 infection rates in 2020
States that required residents to wear masks in public spaces during the height of the COVID-19 pandemic last year saw lower infection rates than those without mandates, a PLOS ONE study found.

Rhode Island and Providence Plantations, more commonly referred to as Rhode Island ( /roʊd ˈaɪlɨnd/ (help·info)), is a state in the New England region of the United States. It is the smallest U.S. state by area. Rhode Island borders Connecticut to the west and Massachusetts to the north and east. Rhode Island also shares a water border with New York's Long Island to the southwest.

Rhode Island was the first of the thirteen original colonies to declare independence from British rule and the last to ratify the United States Constitution.

FULL ARTICLE AT WIKIPEDIA.ORG
This article is licensed under the GNU Free Documentation License.
It uses material from the Wikipedia article "Rhode Island."
Back to Article
/