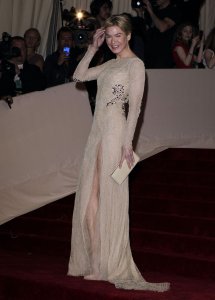 Entertainment News // 11 months ago
Oscars 2020: How to watch
The 92nd annual Academy Awards, which recognizes excellence in film, is set to take place live on Sunday.

I don't think this is a 'chick flick' at all

They remain good friends. There's no scandal and no new relationships

The work is all-encompassing and there are so many things that you are not allowed in your life, because of it. Conventional friendships, unconditional friendships. I'd like to have coffee every day with my friends. I envy my friends who have that. So I'm stopping, I'm not really considering anything until this time next year

Renée Kathleen Zellweger (born April 25, 1969) is an American actress and producer. Zellweger first gained widespread attention for her role in the film Jerry Maguire (1996), and subsequently received two nominations for the Academy Award for Best Actress for her roles as Bridget Jones in the comedy Bridget Jones's Diary (2001) (which she reprised in its sequel Bridget Jones: The Edge of Reason (2004)), and as Roxie Hart in the musical Chicago (2002). She won the Academy Award for Best Supporting Actress for her performance in the drama Cold Mountain (2003).

She has won three Golden Globe Awards and three Screen Actors Guild Awards, was named Hasty Pudding's Woman of the Year in 2009, and established herself as one of the highest-paid Hollywood actresses as of 2007.

Zellweger was born in Katy, Texas, a western suburb of Houston. Her father, Emil Erich Zellweger, is from Au, St. Gallen in Switzerland, and is a mechanical and electrical engineer who worked in the oil refining business. Her mother, Kjellfrid Irene (née Andreassen), is Norwegian-born and of Sami origin, and is a nurse and midwife who moved to the United States in order to work as a governess for a Norwegian family in Texas. Zellweger has described herself as being raised in a family of "lazy Catholics and Episcopalians". She has an older brother, Andrew.

FULL ARTICLE AT WIKIPEDIA.ORG
This article is licensed under the GNU Free Documentation License.
It uses material from the Wikipedia article "Renee Zellweger."
Back to Article
/