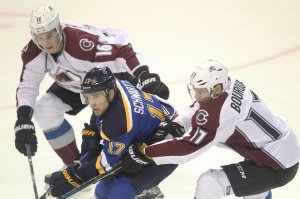 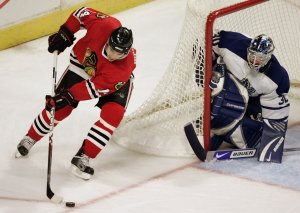 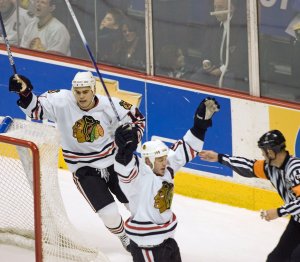 NHL // 4 years ago
NHL roundup: recap, scores, notes for every game played on March 23
WASHINGTON -- Washington's T.J. Oshie scored the only goal during a shootout, and the Capitals defeated the Columbus Blue Jackets 2-1 on Thursday.

NHL // 4 years ago
NHL roundup: recap, scores, notes for every game played on March 2
WASHINGTON -- Jakub Vrana broke a scoreless tie at 7:21 of the third period and the Washington Capitals defeated the New Jersey Devils 1-0 on Thursday night for their franchise-record 14th straight home win.

NHL // 4 years ago
Patric Hornqvist, Matthew Murray power the Pittsburgh Penguins past the Colorado Avalanche
DENVER -- Sidney Crosby didn't get the two points he needed but his team picked up a valuable pair despite an off night.

René Gary Wayne Bourque (born December 10, 1981) is a Canadian professional ice hockey left winger who currently plays for the Calgary Flames of the National Hockey League (NHL). An undrafted player, Bourque was signed by the Chicago Blackhawks as a free agent in 2004 and made his NHL debut in 2005–06. He spent three years in Chicago before a 2008 trade sent him to Calgary where he has established himself as a key offensive player for the Flames.

Bourque is a graduate of the University of Wisconsin, where he played four seasons of hockey and served as a co-captain in his senior year. He turned professional in 2004 when he joined the Norfolk Admirals of the American Hockey League (AHL). He won the Dudley "Red" Garrett Memorial Award as the league's rookie of the year in 2004–05 before beginning his NHL career. Bourque has played for the Canadian national team at the 2010 IIHF World Championship.

Of Métis heritage, Bourque has initiated several charitable causes dedicated to encouraging aboriginal children and helping youth from rural Northern Alberta afford the cost of playing hockey. He's also fluent in french, he is a Franco-Albertan.

FULL ARTICLE AT WIKIPEDIA.ORG
This article is licensed under the GNU Free Documentation License.
It uses material from the Wikipedia article "Rene Bourque."
Back to Article
/