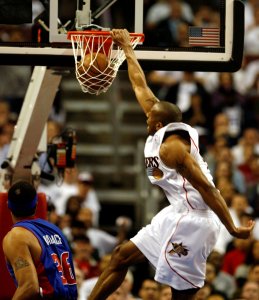 I said what I say all the time with the, 'Ball don't lie

We believed from the beginning and the fans here, they believed in us

Rasheed Abdul Wallace (born September 17, 1974) is an American professional basketball player who is currently on the roster of the Boston Celtics in the National Basketball Association (NBA). At 6 ft 11 in (211 cm) and 230 lb (104 kg), Wallace is a power forward/center. A native of Philadelphia, Pennsylvania, he played college basketball at the University of North Carolina before joining the NBA.

Originally selected by the Washington Bullets (now the Washington Wizards) as the fourth pick in the 1995 NBA Draft, Wallace was named to the All-Rookie second team following his first season. He was then traded to the Portland Trail Blazers after the season. With Portland he was a key member of the Blazers team that made it to the Western Conference Finals in 1999 and 2000, and was an NBA All-Star in 2000 and 2001. Wallace averaged a career best 19.4 points per game in 2002 for the Blazers.

During the 2003–04 season Portland traded him to the Atlanta Hawks where he played one game before he was traded to the Detroit Pistons. With the Pistons he won the NBA championship in 2004 and lost the NBA Finals the following season, and individually he was an All-Star in 2006 and 2008. After the 2008–09 season he left Detroit as a free agent and signed with Boston. Wallace is currently the NBA's all-time leader in technical fouls with 306.

FULL ARTICLE AT WIKIPEDIA.ORG
This article is licensed under the GNU Free Documentation License.
It uses material from the Wikipedia article "Rasheed Wallace."
Back to Article
/