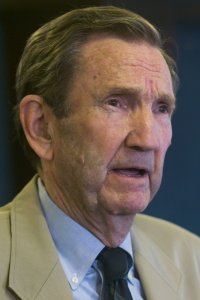 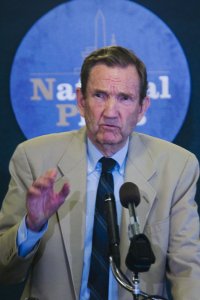 When you think of all the things people have said, it's very difficult to see anything happening except a death sentence

You cannot have a fair trial without the fair procedures

To me it is the worst possible memorial you could have to those who died at the Pentagon and World Trade Center on Sept. 11th is to kill poor people in other countries by the thousands

We believe that (this case) is awfully important, not only to the wishes of Geronimo himself, but to the spirit of the Indian people and their relationships to the government of the United States

William Ramsey Clark (born December 18, 1927) is a lawyer and former United States Attorney General. He worked for the U.S. Department of Justice, which included service as the 66th United States Attorney General under President Lyndon B. Johnson. Ramsey is known for his advocacy for civil and human rights causes. He is also known for his role as defense attorney in the trials of Slobodan Milosevic and Saddam Hussein. He was a recipient of the Gandhi Peace Award and the Peace Abbey Courage of Conscience Award.

Clark was born in Dallas, Texas to Mary Jane Ramsey and Tom C. Clark, who was also a United States Attorney General and a justice of the Supreme Court. Clark served in the United States Marine Corps in 1945 and 1946, then earned a B.A. degree from the University of Texas at Austin in 1949, and an M.A. and a J.D. from the University of Chicago in 1950.

He was admitted to the Texas bar in 1950, and to practice before the Supreme Court of the United States in 1956. From 1951 to 1961, Clark was an associate and partner in the law firm of Clark, Reed and Clark.

FULL ARTICLE AT WIKIPEDIA.ORG
This article is licensed under the GNU Free Documentation License.
It uses material from the Wikipedia article "Ramsey Clark."
Back to Article
/