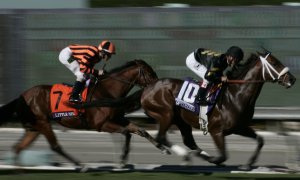 I was very impressed with the fact that after he clipped heels, he came back running

I was a little concerned about the slow pace. But I was very happy with the way he was traveling. Turning for home, I felt it was a matter of getting a little racing luck. When he split horses, at that point, I felt a little more confident, and that he would get there

Dominguez began riding horses at age 16 in his native Venezuela in show jumping then turned to riding thoroughbreds in flat racing events. He emigrated to the United States where he began riding at Florida's Hialeah Park Race Track in 1996.

In 2001 he got his big break by becoming the winningest jockey in the United States. He repeated the feat in 2003, and in 2004 he won the Isaac Murphy Award for having the highest winning percentage among all American-based jockeys.

FULL ARTICLE AT WIKIPEDIA.ORG
This article is licensed under the GNU Free Documentation License.
It uses material from the Wikipedia article "Ramon Dominguez."
Back to Article
/